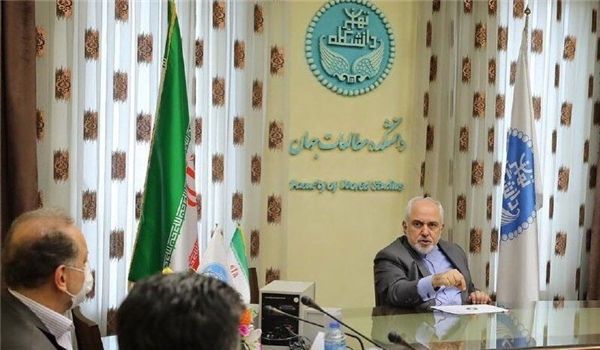 TEHRAN (FNA)- Iranian Foreign Minister Mohammad Javad Zarif underlined that miscalculations and major mistakes made by the world's big powers over the past decades are the root cause of the surge in extremism in West Asia.

Zarif made the remarks in a speech delivered at the Faculty of World Studies at the University of Tehran on Monday, the second part of a five-part course in international relations themed 'World in Transition'.

“Extremism was a result of miscalculations and occupation of regional countries by world powers," the Iranian foreign minister said.

Zarif reiterated that the main problem, which evolved into the existing sad conditions is the problem of "misunderstanding" and "miscalculation", which caused both regional powers and superpowers to make mistakes.

"Miscalculations made by big powers, or in other words superpowers, with regard to the world's modern order have resulted in consequences, which are by far more disastrous than the mistakes made by other countries," he added.

He described the 2003 US-led invasion of Iraq as one of the big powers' miscalculations, saying that there were many ambiguities surrounding the attack at its onset.

"But something was conspicuous. It was clear from the very beginning that this [US] war against Iraq would lead to the spread of extremism in the world," Zarif further reiterated.

In early 2003, the United States, backed by the UK, invaded Iraq under the pretext that the regime of the country's former dictator, Saddam Hussein, possessed weapons of mass destruction (WMD). No such weapons, however, were ever found in Iraq.

The invasion plunged Iraq into chaos and led to the rise of terrorist groups, including the Daesh Takfiri group, across the region.

Elsewhere in his speech, Zarif touched on the US withdrawal from several international treaties, and said such a policy is just similar to those bigoted and obstinate ideas that contravene the world's realities on the ground.

"Some players in the international scene, like the United States, have struggled to take control of the situation by resorting to outdatedrules and reliance on their military superiority, but their approach led to a disaster," the top Iranian diplomat asserted.

The US under President Donald Trump has pulled out from several international treaties in defiance of global outcry.

Trump, a hawkish critic of a landmark 2015 nuclear deal between Iran and six world powers, officially known as the Joint Comprehensive Plan of Action (JCPOA), unilaterally withdrew Washington from the agreement in May 2018, and unleashed the “toughest ever” sanctions against the Islamic Republic in defiance of global criticism.

The Trump administration also pulled the United States out of the Intermediate-Range Nuclear Forces Treaty (INF) with Russia last year. The 1992 treaty allows member countries to conduct short-notice, unarmed, reconnaissance flights over the other countries to collect data on their military forces and activities.

Trump has also pulled his country out of the UN cultural organization UNESCO and the Paris climate accord.