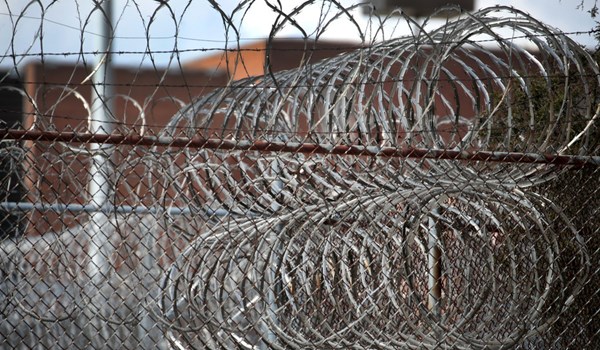 TEHRAN(FNA) - Two prison guards and two inmates were injured after a riot broke out at the Ware State Prison in Georgia.

Officials said the riot broke out at the prison, in Waycross, around 10:40 pm on Saturday night, according to Newsweek.

The situation was under control by 1 am and the prison was on lockdown, a spokesperson for the Georgia Department of Corrections confirmed to Newsweek.

No other information was immediately released, but videos purported to have been filmed by inmates inside the prison were livestreamed and circulated on social media.

One clip showed an inmate covered in blood as other inmates are seen helping him clean what appears to be a gunshot wound. Another clip showed two inmates briefly hold hands as others tending to their injuries. Another video circulating on social media showed inmates freely walking around the prison, while another clip appeared to show fires had been set on the grounds.

Corey Jackson, a spokesperson for the Human and Civil Rights Coalition of Georgia, told Newsweek that the prison had been under lockdown after the death of an inmate two weeks ago.

Officials announced that they are investigating the death of the inmate, Robert Wilson. He is believed to have died after sustaining injuries during an altercation with another inmate on July 17.

Tensions were also inflamed because inmates with COVID-19 have received "little to no medical care", Jackson noted.

"What led to this is Ware has an entire building with sick inmates," he said, adding, "They have COVID-19 with little to no medical care. They had been on lockdown for weeks after a murder there about three weeks ago."

The prison has about 15 officers per shift to handle some 3,000 inmates, Jackson continued.

Some inmates at the prison also recently told The Atlanta Journal-Constitution that there were tensions in the prison due to the coronavirus pandemic.

Two inmates at the prison have died of COVID-19, while 22 inmates and 32 employees have tested positive, according to the Georgia Department of Corrections.