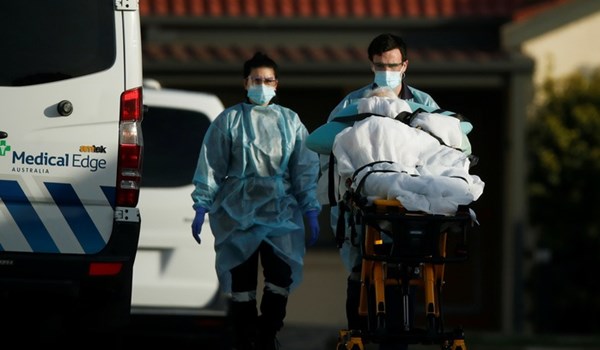 TEHRAN (FNA)- The state premier of Australia's Victoria declared a state of disaster to help contain the surge in coronavirus cases as he reported 671 new infections - almost double the previous day.

In a news conference on Sunday, Victoria Premier Daniel Andrews also announced a curfew in the city of Melbourne and new movement restrictions for its residents, according to Al-Jazeera.

Andrews said that, for six weeks beginning on Sunday until the middle of September, a curfew will be imposed daily from 8 pm (10:00 GMT) to 5 am (19:00 GMT) the next day.

Within the same period, residents of Melbourne are not allowed to travel beyond five kilometres (3.1 miles) from their residence, and only one person per household is allowed to shop for groceries once a day.

On Saturday, the state of Victoria reported 397 new COVID-19 cases.

Meanwhile, a stay-at-home order will also be imposed for areas outside Melbourne starting at midnight on Wednesday.

More restrictions on businesses will be announced on Monday, the state premier added.

As this developed, Melbourne residents headed to the supermarket on Sunday before a new lockdown.

Social media users posted images of empty shelves and queues at local supermarkets. One eyewitness told Reuters news agency that the line had doubled in size as he left the supermarket.

Earlier on Sunday, Australia's national government expressed support for the strictest measures yet imposed by the state of Victoria.

The backing by the federal government, ruled by a Liberal Party-led coalition, for the measures by Victoria's Labor Party government shows national unity of message across the political spectrum in a country with a loose federal system.

Melbourne, Australia's second-largest city, is already under a reimposed six-week stay-home order, but it has been struggling to rein in COVID-19.

Education Minister Dan Tehan told Sky News that the federal government would "absolutely" support Victoria in ramping up its measures.

"We will continue to offer as much support as we can," Tehan said, adding, "There's no question these are very difficult times in Victoria."

Australia has fared far better than many other countries in keeping the coronavirus from spreading but at a high economic cost.

It has recorded approximately 17,300 coronavirus cases and 200 COVID-19 deaths, but the recent surge in Victoria has proven difficult to contain.

More Than 900 US Healthcare Workers Died of COVID-19, Toll Is Rising

TEHRAN (FNA)- More than 900 frontline healthcare workers have died of COVID-19, according to an interactive database unveiled on Tuesday by The Guardian and KHN.

TEHRAN (FNA)- President Donald Trump signaled a new shift in his public health posture to the coronavirus pandemic Monday at the White House when he announced the presence of Dr. Scott Atlas – who has warned of the costs of school closings.

TEHRAN (FNA)- Dawn Butler, the Labour MP and former shadow equalities minister, accused the police of being institutionally racist after she and a friend were stopped while driving to Sunday lunch.