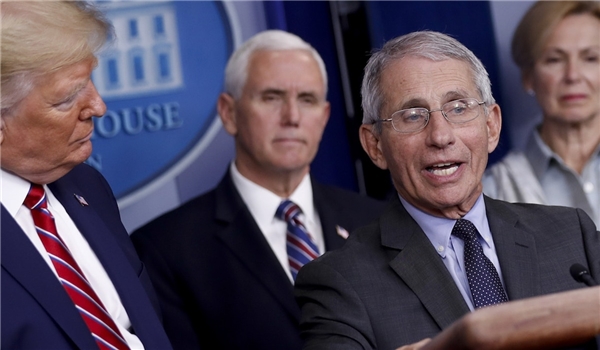 TEHRAN (FNA)- While he was busy spending most of Saturday golfing, US President Donald Trump did take some time to slam infectious disease expert Dr. Anthony Fauci on Twitter.

The president insisted the expert was wrong to say that cases are surging in the US - despite the country surpassing 4,579,000 COVID-19 cases and more than 153,000 deaths as of Saturday, according to Daily Mail.

Trump retweeted a CBS News tweet that featured a clip of Dr. Fauci speaking at congress on the surge of coronavirus cases in several states across the United States.

"Wrong! We have more cases because we have tested far more than any other country, 60,000,000," Trump said in the Saturday afternoon tweet.

"If we tested less, there would be less cases. How did Italy, France & Spain do? Now Europe sadly has flare ups. Most of our governors worked hard & smart. We will come back STRONG!" he added.

Trump tweeted just moments after her was pictured enjoying yet another day out on the golf course at the Trump National Golf Club.

During Friday's House committee hearing, Fauci explained why the shutdown didn't have as much of an impact as desired in comparison to other countries.

"I stand by my previous statement that the increase in cases was due to a number of factors, one of which was that in the attempt to reopen, that in some situations, states did not abide strictly by the guidelines that the taskforce and the White House had put out and others that even did abide by it, the people in the state actually were congregating in crowds and not wearing masks," Fauci said, when asked by Rep. Jim Clyburn to address the president's claims in a tweet addressing the representative.

Fauci said that while other countries' shutdowns actually shut down about 95 percent of activity, the best the US got to was about 50 percent.

"There was such a diversity of response in this country from different states that we really did not have a unified bringing everything down," he said.

It's been Trump's resistance to public health messaging that made is appear he had bad blood with Fauci, who has encouraged Americans to wear masks and frequently sports one.

In front of the cameras, Trump has insisted that he and Fauci get along.

"I have a very good relationship with Dr. Fauci. I've had for a long time - right from the beginning. I find that to be a very nice person. I don't always agree with him," Trump said during a law enforcement event at the White House.

"I get along with him very well. I like him personally," the president added.

But behind-the-scenes, however, the White House passed along fact sheets to reporters pointing out Fauci's mistakes.

And then there was Trump's claim that he was throwing out the first pitch at an August 15 Yankees game.

Trump told reporters of the plan the same day Fauci threw out his somewhat awkward first pitch at the Washington Nationals' home opener.

But The New York Times reported Monday that the announcement was a surprise to the Yankees and to staff at the White House as Trump had told aides to reach out to the New York baseball team to make good on an ask from Yankees President Randy Levine for him to throw out a first pitch.

The date hadn't been decided on.

The Times reported that Trump was annoyed that Fauci had been asked by the Nationals to throw a pitch so decided to one-up him.

But by Sunday the president had soured on the plan.

"Because of my strong focus on the China Virus, including scheduled meetings on Vaccines, our economy and much else, I won't be able to be in New York to throw out the opening pitch for the Yankees on August 15," he Sunday, using a slur to reference the coronavirus.