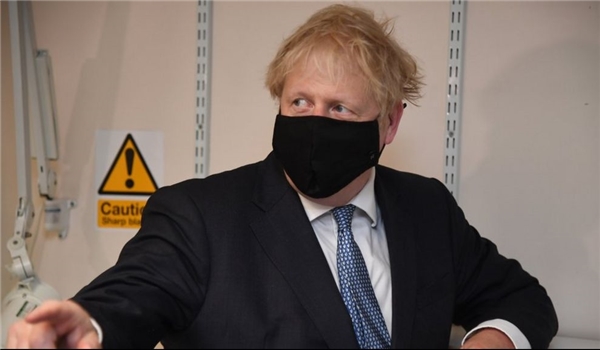 TEHRAN (FNA)- Pressure is mounting on Prime Minister Boris Johnson to restore elements of lockdown amid evidence of increased coronavirus infections, with one member of the Independent Sage group of experts telling The Independent that indoor venues like pubs and gyms should shut in an effort to reach “zero COVID”.

Professor Susan Michie’s call came after chief medical officer Chris Whitty warned that England was now “near the limit” of the restrictions which can be relaxed without losing control of the virus, telling a Downing Street press conference, “If we wish to do more things in the future, we may have to do less of some other things.”

A member of the government’s official Sage group of scientific advisers said pubs and other leisure venues may have to close in order to allow children to return safely to classrooms in September.

“It might come down to a question of which do you trade off against each other and then that’s a matter of prioritising,” Professor Graham Medley told BBC Radio 4’s Today, noting, “Do we think pubs are more important than schools?”

Fears of a breakdown of social distancing grew on a heatwave Saturday which saw “unmanageable” crowds flock to beaches on the South coast and Wales.

A new survey by pollsters Opinium found high levels of concern about a “second wave” of COVID-19, with 75 percent of those questioned saying they expected a further outbreak later this year - and almost one-third (32 percent) of these saying they believe it will be worse than the first wave.

Freshly-released minutes of a meeting of Sage (the Scientific Advisory Group on Emergencies) showed that as early as June 23 the government’s expert advisers were discussing the likelihood that relaxations of lockdown restrictions may have to be reversed in a trade-off with other priorities, such as reopening the schools. Records of the meeting displayed concerns that a summer of relative freedom could force the reproduction rate of coronavirus - known as R - above the crucial level of one at which the disease can run out of control by the time of pupils’ intended return to lessons.

“Measures should be considered in combination and cannot meaningfully be assessed individually,” said the Sage minutes, adding, “There will be trade-offs to be made when considering what measures need to be retained or reintroduced …

“There may be a need to change measures at the end of the summer in order to be able to keep R below 1 whilst proceeding with the planned reopening of schools,” it announced.

And the minutes warned, “As measures are reversed, behavioural responses will not necessarily mirror those observed as measures were imposed as a result of the different psychological context, which may include altered levels of trust, fear and anger.”

Michie told The Independent it was time for the UK government to adopt a “zero COVID” strategy for England to match those in Scotland and Ireland, pursuing the elimination of the virus from community transmission rather than accepting a certain level of infection as the pay-off for opening up business and leisure.

“If they wanted zero COVID, they wouldn’t be opening gyms,” said Michie, the professor of health psychology at University College London.

“They wouldn’t be opening super-spreader areas like indoor pubs and bars, places where people are close to each other and touching each other and shouting and sweating,” Michie continued.

She added, “We have to look at first principles. The more people you are in contact with for the longer time and the closer in distance, and the more there is going to be shouting or singing or sweating, the more risk there is. Now that we now there is aerosol transmission, it is clear that the more ventilation there is the less risk there is."

“Drinking outdoors is less risky than inside. Open air markets are much less risky, and shops which have a lot of people going through without much ventilation more risky,” she noted.

Michie said, “The government should be less short-term and less ‘wing and a prayer’ and more focused on the lessons from other countries where they’ve got COVID down and kept it down."

“We need to be in a position where we can have confidence that children can get back to school in September and businesses can reopen with confidence. If we hadn’t lifted lockdown in June we could have been looking at zero COVID in September. If we restricted those high-risk places, then by October and November when the pressures start building on the NHS, then hopefully we can get through the winter,” she added.

Former Schools Minister David Laws, now chair of the Education Policy Institute, backed calls for a trade-off between ”nice-to-do” relaxations like pub opening and the “vital” priority of getting schoolchildren back into class.

“Having schools going back and all children back in schools is going to mean a lot more social contact,” Laws told Sky News, adding, “So it is quite possible that the government will need to rethink some of its other aspirations for the autumn, and that there may have to be more social distancing in other areas.

“I think the government might have to rethink its recent attempt to nudge people who have been working at home back into the workplace, I suspect that many people who use public transport but could be working at home, may find themselves doing so right through until next spring rather than the autumn of this year," Laws  said.

“And I think we might also have to rethink the opening of some parts of the hospitality industry, given that it's more important that we have our education system back to normality than some of the other things that would be nice to do,” Laws  added.

Medley, the professor of infectious disease modelling at the London School of Hygiene and Tropical Medicine, said the restoration of lockdown measures in areas across the north-west of England last week were “highly unlikely” to be the last regional intervention.

He told Today, “I think we’re in a situation whereby most people think that opening schools is a priority for the health and wellbeing of children. And so actually, closing some of the other networks, some of the other activities may well be required to enable us to open schools.”

Medley added the current upsurge in coronavirus infections appeared to be among younger people but warned there was a danger it could “spill” over into other parts of the population.

“The age distribution of infections has changed, it has moved down into younger age groups and so it is likely we won’t see that increase in hospital admissions related to infection in the same way we did in March,” he said.

“But the big fear is the virus just gets out of control and we end up in a situation where there is so much virus that it inevitably spills out into all sections of the population,” he added.

Michie noted the government should be focusing more on the “isolate” strand of the “test, trace and isolate” system.

Independent Sage has long argued that an effective system must include financial support to reduce pressures to breach the 14-day period of isolation required of those identified as close contacts of coronavirus patients.

“The problem is that the government hasn’t got a strategy to support people to isolate,” she said.

She suggested England should learn from Vietnam, where coronavirus deaths were avoided altogether until the first fatality on Friday last week and where anyone who tests positive and their contacts are provided with accommodation to complete their isolation.

Thousands of hotel rooms lying empty could be used for those unable to isolate at home or those quarantining after arriving from abroad, she said.

“It seems expensive now, but it’s not if it means that within a matter of months we can properly reopen the economy,” she added, warning that Johnson’s whack-a-mole strategy of clamping down on local flare-ups means an unpredictable cycle of relaxations and restrictions.

“There are going to be other Leicesters,” she said, adding, “Businesses want certainty and predictability, they don’t want to be opening up to shut down again.

“What the government should be trying to do in England is what Scotland and Ireland are doing and that is going for zero COVID - eliminating any community transmission and getting a good test-and-trace system in place before the winter flu season, because that allows us to jump on any local outbreaks quickly and use quarantine at the borders to stop new seeding events," she underlined.

“Otherwise it’s potentially going to be very problematic,” she underscored.