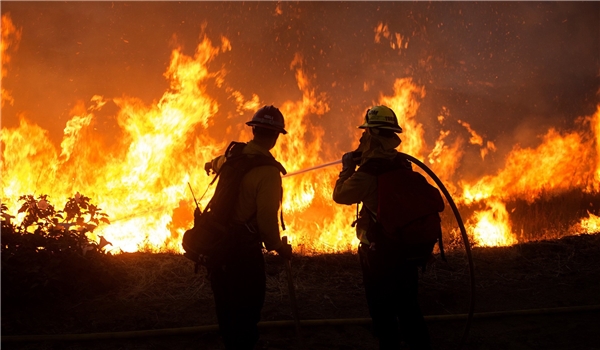 TEHRAN (FNA)- A wildfire in Southern California quickly spread across 12,000 acres Saturday, destroying at least one home and two structures and forcing 7,800 people to evacuate.

The Apple fire in Riverside County, about 75 miles East of Los Angeles, was being fought by 375 firefighters with dozens of fire engines and air support. But it remained 0 percent contained Saturday evening, NBC News reported.

As it moved North into San Bernardino County, evacuation orders were issued for two areas, Potato Canyon and Oak Glen, the California Department of Forestry and Fire Protection said.

Firefighters worked in scorching heat that reached 107 degrees Saturday, according to the National Weather Service. About an hour Southwest, in Coachella Valley, temperatures hit 120 degrees.

"At this point we are establishing control lines, and we're expecting some containment by tomorrow morning," CalFire division Chief Ty Davis announced.

"We are currently in the extended attack phase of the fire," Davis said Saturday, adding, "The public and the residents can expect additional fire department resources in and out of the area."

The blaze was first reported as two small, separate fires Friday night near Cherry Valley. But the two outbreaks grew exponentially within hours, leading authorities to issue the first evacuation orders by 7:30 pm for areas around the neighboring cities of Banning and Beaumont.

The National Weather Service warned that the Southwest would face hot and dry conditions with low humidity levels and gusty winds until late Sunday. All these components added up for the strong potential of fire weather.

TEHRAN (FNA)- The Iranian airlines use special paints produced by the country’s nanotechnology firms as a coating for the outer surface of the aircraft used to carry people and cargo.
﻿
﻿
Sections