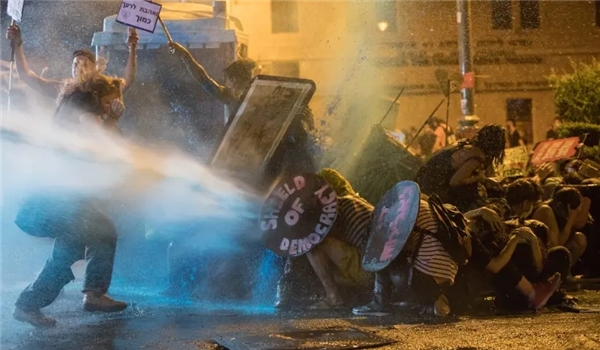 TEHRAN (FNA)- A senior police official stated behind closed doors that "Israel is in a state of social chaos", N12 reported, as violence broke out at anti-government protests.

The group reportedly infiltrated the demonstration, attacking a group of protesters with pepper spray and glass bottles.

The photograph of 27-year-old protester Shai Sekler, who was injured by the group, began circulating social media following the violent incident.

"When the rally reached the Cinematheque area, a group of ten people in black joined [the protest]," Sekler said in an interview with Ynet.

"At first, we thought they were undercover detectives because they moved as an organized group," he added.

"At some point, they began attacking [protesters] with knives, bats and glass bottles," he continued, noting, "I ran to help those injured and then one of them attacked me with a sharp object and another two toppled me."

After the attack, "I ran after them with other demonstrators to film them and call the police. Around Kaplan Street, they tried attacking us once again and sprayed us with pepper spray", Sekler told the media outlet.

"Covered in blood, I saw undercover officers and asked them for help, that they'd call for backup or an ambulance, and they ignored me," he recalled.

"The moment that scared me the most out of all that happened was that police are here not to protect public order and civil rights," he said, adding, "As far as I am concerned, they chose the side of the regime, and that is the result of incitement."

An undercover police officer was reportedly injured by a rock thrown at the group by the anti-Netanyahu protesters. Speaking to Jaffa Precint Commander, Chief Superintendent Yitzhak Cohen on N12, Sekler accused police of collaborating with the attackers, allegedly affiliated with the far-right La Familia group.

"The officers did not understand who is who when looking at the group fleeing the scene," Cohen told Sekler, noting, "A rock was thrown, and had it hit [the officer's] head, the damage would have been more significant."

"The reason why that officer was injured was that he was walking within the attackers group, with them," Sekler said, responding to Cohen.

"I came up to the officers asking for help, and they refused," Sekler added.

Three members of the group were arrested by law enforcement after being identified on video footage from the incident. They were subsequently freed from police custody following a court hearing, as the judge announced it was unclear who started the fight.

"Violence against protesters could lead to civil war," Gantz stated in an interview with Channel 13 last week, adding, "We must stop this hatred and incitement."

Gantz noted neither Netanyahu's supporters nor those rallying against him "can engage in this hatred of the other", adding that former prime minister Yitzhak Rabin "was not assassinated because of hate on the Left."

President Reuven Rivlin also warned of an escalation of political violence in Israel, stating the "murder of a demonstrator protesting in Israel nor that of an Israeli prime minister are not imaginary scenarios".

Eight La Familia members were arrested for attacking the crew and allegedly throwing rocks at cars near Jerusalem's Central Station. Some 16 people were arrested on Friday for attacking protesters and a police officer. Some 13 are facing a bail hearing. According to The Jerusalem Post's sister publication, Maariv, half of those arrested are minors.

Back in late April, a team from the National Security Council tasked with combating the coronavirus outbreak discussed an armed revolt scenario caused by the economic crisis, according to Haaretz.

The 30-member team that brought together government officials, analysts and representatives from the IDF, the NSC, police and academia, reportedly discussed the circumstances that may lead to such a civil uprising alongside ways to suppress it.

The team claimed that distress and anger "will not lead to large-scale social phenomena on their own, at least in the short term". The second scenario, however, holds the potential to cause substantial "long-term damage to Israeli society and democracy".