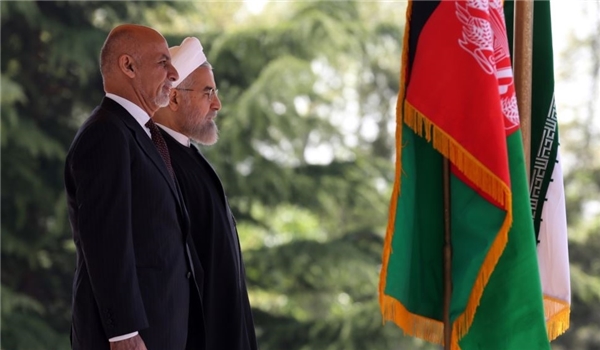 Rouhani made the remarks during a phone call with Afghan President Ashraf Ghani late on Saturday.

Iran’s president underlined the need for further expansion of ties with Afghanistan by using of economic, trade and transit capacities of both nations, noting that what is important for Iran is sustainable peace and calm in the war-torn Central Asian country.

He stressed that peace in Afghanistan is tantamount to peace and stability in the entire region.

If the situation caused by coronavirus subsides, we will be able to register the operation of the Khaf-Herat railway, and also sign a comprehensive cooperation document between the two countries, Rouhani stated.

Ghani, for his part, appreciated Iran's supports for the Afghan nation and government, saying that Iran has provided Afghan migrants with proper health and medical services to protect them against coronavirus.

Noting that the Afghan and Iranian private sectors well know the way of bilateral interaction, he continued, "Chabahar port is booming at a good pace and I hope the economic relations between the two countries would further improve by using this capacity."

In relevant remarks on June 1, Iranian President Hassan Rouhani in a phone conversation with his Afghan counterpart Ashraf Ghani stressed his country's readiness to further strengthen relations and cooperation with Kabul.

Rouhani congratulated Ghani on his new term in office, and expressed satisfaction with the agreement reached between the political groups in the country.

He expressed the hope that with the efforts of all elements of the government and the High Council for National Reconciliation greater peace, stability and security would be achieved in Afghanistan.

He stated that the policy of the Islamic Republic of Iran is to develop fraternal and friendly relations and cooperation with all neighbors, specially Afghanistan, and noted, "We consider the development of stability and security in Afghanistan in line with our own stability and security and believe that disagreements among groups can be resolved within the framework of principles and we are always by the side of the Afghan government and people in doing so.”

"We must work to accelerate the implementation of agreements and projects between us, including the Khaf-Herat railway, as one of the most important economic projects between the two countries,” said Iranian President, adding, “The bilateral relations between Iran and Afghanistan are on the path to progress.”

"Completing and launching the Chabahar-Zahedan railway project in the coming year can create a positive transformation in the development of transportation of goods in the region,” he noted.

During the conversation, both sides stressed the need to work for the comprehensive development and strengthening of Tehran-Kabul relations in order to ensure the interests of both nations.

Ghani, for his part, wished good health and success to the government and people of Iran in fighting coronavirus, and praised the assistance and medical services provided to Afghan refugees in Iran.

Referring to the constructive role of the Islamic Republic of Iran in the stability and security of the region, Ghani called on Iran to support the peace and dialogue process in Afghanistan.

He also referred to the developing relations between Iran and Afghanistan in various fields and expressed hope that with the efforts of the officials of the two countries, relations and cooperation between the two countries would develop.