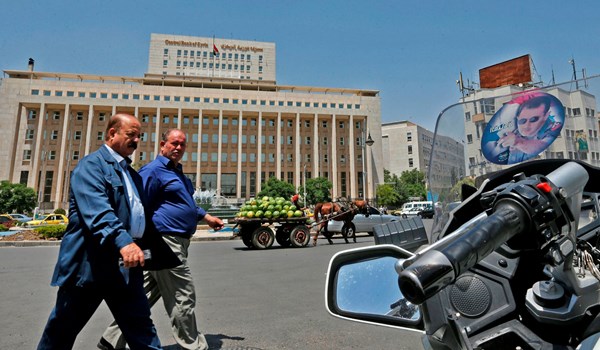 TEHRAN (FNA)- The United States has imposed a new round of illegal sanctions against the Syrian government and people, a move with a clear eye on limiting the nation’s ability to plan for the end of the war, and making reconstruction deals.

The US has long opposed any peace efforts or post-war elections that didn’t turn out in line with US visions for the future of Syria. The new sanctions go beyond that, threatening to blacklist anyone who is willing to do business with the Syrians and help in their reconstruction efforts.

This would cover a lot of basic commerce Syria might engage in in the course of reconstruction, particularly importing goods and services, and may force Syria to delay such rebuilding for lack of willing contractors. This sort of escalation of illegal sanctions is in breach of international law and the UN Charter. Experience tells us this criminal policy will also fail to bring Syria to its knees. There are many good reasons for this.

The Trump administration has banned Syrians from traveling to the United States for family visits. This includes Syrian refugees. If Washington cares for the Syrian people’s human rights and economic hardship, it wouldn’t impose economic hardship or travel ban on them through illegal measures to pressure the government to capitulate.

If the US really sympathizes with the long-suffering people in Syria, it wouldn’t impose illegal restrictions against the country, including a ban on peace and reconstruction efforts, where many people are facing hardship amid an unjustified US-backed warfare and terror.

This hypocrisy is systematic. There are many within the Trump regime and the Capitol Hill that have emerged as self-styled defenders of the Syrian people and democracy – the kind of hypocrites that have a long record of calling for bombing Syria and occupying the country permanently that will potentially leave many dead and injured.

Perhaps, this should be a reminder for a handful of those who are still under the illusion that America is a true defender of freedom and democracy not just in Syria but in rest of the region. On the contrary, America’s hostile history shows that the Trump regime is just an opportunist and an agitator of instability - no more qualified to speak about freedom and democracy or human rights in Syria and the region than its terror proxies.

The “sympathy” for people coming from the Trump White House is only designed to agitate for further war and instability in Syria from people who are pretending to care about the Syrian people, their human rights, and their post-war welfare. They actually couldn't care less about the Syrian people. Lest we forget, these are the same regime changers and war criminals that are still framing their regime-change war on Syria as a “civil war” for democracy.

No doubt there are many deficiencies in the Syrian government and the economy that need to be addressed by the elected government of President Bashar al-Assad in a sustainable, comprehensive fashion. However, that does in no way mean that America and its allies are not the proximate cause of the current social, economic and security crisis, which must be seen not only as a trigger, but its driving force.

The new sanctions is further proof that the current turmoil in Syria has been instigated by extraterritorial enemies, i.e., the Saudi-Israeli-US alliance whose anti-regime agitation went nowhere in the Levant despite aiding and abetting so many vile terror proxies and extremist outfits.

As things currently stand, the regime changers haven’t lost their hopes yet. They are desperate for mass discontent and more than ever willing to coordinate military attacks and economic terrorism against the Syrian people in any way possible. With that in mind, they will try to exploit the current economic and social aspirations of the Syrian people for peace and reconstruction in order to further gap between the state and the society at large. All this begs the question, have Syrians learned the hard lessons of the war and can they really determine who their enemies are?

By saying yes to the ongoing peace efforts and helping their government to build the country, and by condemning the new set of sanctions imposed by the United States, they can show that they have indeed learned their lessons. Indeed they are capable of successfully pursuing their political, economic, and social aspirations without Washington’s fake sympathy. They can and should also show that the Trump regime does not possess any ability to interfere in their national reconciliation talks and future reconstruction efforts.