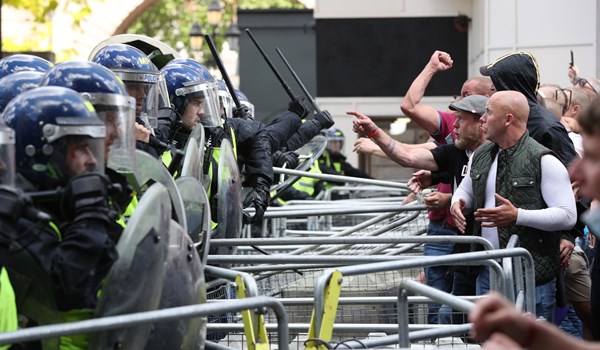 “A serious deterioration of public order could overwhelm all attempts to control contagion, overwhelm hospitals, the criminal justice system and hinder revival of the economy,” said a paper that was considered by the Scientific Advisory Group for Emergencies (Sage) earlier this month, according to The Independent.

“Tensions resulting from the pandemic and lockdown have become inextricably bound with structural inequalities and international events. While widespread urban disorder is not inevitable, currently, the situation in the UK is precariously balanced,” it added.

It said the “potential disorder could be comparable or bigger in scale to the rioting of August 2011, but police capacities and capability has diminished”.

Experts indirectly accused the government of contributing to tensions with unclear messaging, saying the situation was worsened by a “lack of clear, consistent, message for all to adhere to regarding who can go where, when, with whom and with what precautions”.

The report, which was written before Thursday’s Northern lockdown announcement, warned that local lockdowns could inflame racial and religious tensions.

It said the Muslim festival of Eid al-Adha, which took place on Friday, would be “potentially problematic if occurring in the context of a localised lockdown”.

“These issues cannot be ignored as they represent key threats to public health and the delivery of a coherent recovery strategy,” the document said.

“They are also known to be associated with the development of riots,” according to the document.

Following the international reaction to the killing of George Floyd, it said that the “smallest error in policing”, either inside or outside Britain, could “unleash a dynamic which will make the management of COVID-19 all but impossible”.

“These issues cannot be ignored as they represent key threats to public health and the delivery of a coherent recovery strategy,” the document said.

“They are also known to be associated with the development of riots.”

Following the international reaction to the killing of George Floyd, it said that the “smallest error in policing”, either inside or outside Britain, could “unleash a dynamic which will make the management of Covid-19 all but impossible”.

The paper, written by Sage’s SPI-B policing and security sub-group, was considered on July 2 but not published until Friday.

It called the current situation in Britain “volatile and highly complex”, citing concerns including protests, illegal raves, resumed football matches and the reopening of pubs.

Experts warned that the legitimacy of policing was being affected by the disproportionate lockdown fines handed to black and Asian people, increasing stop and search, wrongful coronavirus prosecutions and long-term disparities highlighted by Black Lives Matter protests.

At the same time, they said extreme right-wing groups had been “coalescing and mobilising at a scale not witnessed” for a decade to “defend statues”.

“Increased polarisation of political discourse makes conflict and protest more likely, and this may mutate into new and more violent forms,” the paper warned, adding, “There are clear and evident racist undertones to the emerging tensions.”

The document said there were perceptions among black communities that large gatherings of predominantly white people, including those on beaches, had seen no police intervention whereas smaller gatherings in ethnic minority communities had been treated harshly.

It said the UK’s first local lockdown, in Leicester, had provoked “extensive racist commentary” because of the area’s Asian population, adding, “Some media narratives are reinforcing claims that Asian and black people in areas of local lockdown are potentially responsible for disproportionately spreading the virus”.

As the report was published on Friday, the pattern was repeating for the Northern lockdown, which was announced on the eve of the Muslim religious festival Eid al-Adha.

Experts warned that if riots did break out, the police would be in a “far weaker position in terms of capacity to deal with these threats than in 2011” following years of austerity hitting officer numbers and facilities.

To mitigate the risk of disorder, the paper urged police to maintain public trust, act impartially, explain their actions and act swiftly on misconduct.

It said that officers “experienced in de-escalation” should be used at illegal gatherings and that riot gear should not be worn until necessary.

At a government level, the paper said “issues of local, generational, racial, ethnic and class inequality need to be acknowledged and addressed”.

In the longer term, it said rising unemployment could create fertile ground for disorder.

A report written by the same committee in February concluded that “large scale rioting is unlikely” but urged the government to provide “clear and transparent reasons for different strategies” to avoid it.

It called for officials to “explain clearly why certain actions are being taken”, set clear expectations on how the response will develop, and “promote a sense the government is following a plan”.

“The public order response to recent events has shown the way we are able to respond proportionately and effectively to varied incidents,” he added.

“Throughout the response to the pandemic police forces have engaged with communities to understand the issues affecting them and to keep them safe,” he said.