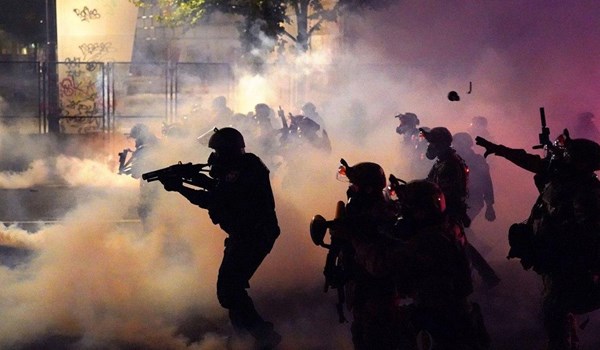 TEHRAN (FNA)- The Department of Homeland Security went on a "shopping spree" for non-lethal weapons, tear gas, flash bang rounds and gas masks in the midst of widespread demonstrations in the wake of George Floyd's death, according to a report.

During the months of June and July, the department spent nearly $1.3 million in taxpayer money on the less-lethal weapons and other riot control supplies, according to data published on the USASpending.gov website and highlighted by the Southern Border Communities Coalition (SBCC), Newsweek reported.

"Data from USASpending.gov reveals that CBP has gone on a shopping spree as it looks to become a national police force, spending taxpayer money to buy less-lethal weapons to use against civilians in cities nationwide who are engaging in First Amendment activities," the SBCC said in a press release.

In an analysis of the spending, the SBCC found that the DHS's US Customs and Border Protection agency had spent more than $1 million on less-lethal weapons alone in early June, days after protests broke out across the country in the wake of Floyd's death.

Later that month, just days before the DHS deployed federal officers to Portland over the July 4th weekend, the department spent $11,970 on munitions.

In a statement shared online, Vicki Gaubeca, the director of the Southern Border Communities Coalition, stated, "US Customs and Border Protection (CBP) is continuing their efforts to militarize our communities, treating our cities like war zones and civilians protesting police brutality as enemies."

"They're spreading the culture of impunity and lack of accountability they've imposed upon the southern border for decades to the rest of the country, and they must be stopped," Gaubeca noted.

"We don't need military-grade weapons being used against our communities. We need a New Border Vision that moves away from enforcement-only policies, and instead towards policies that expand public safety and uphold human rights," Gaubeca continued, touting the SBCC's proposal for border policy.

The most recent rounds of spending would have been made as federal officers were full swing into their deployment to Portland, where they had been tasked with protecting federal property and specifically, the Mark O. Hatfield United States Courthouse.

Incidents of demonstrators being targeted with "less lethal" weapons, as well as videos of federal officers teargassing demonstrators and forcing protesters into unmarked vehicles have sparked widespread outrage, with local and state officials in Oregon calling repeatedly for the administration of President Donald Trump to withdraw its troops.

Earlier this week, Oregon Gov. Kate Brown announced that she had come to an agreement with the Trump administration that would see the federal government begin to withdraw officers starting on Thursday.

In a press call following her announcement, DHS Acting Secretary Chad Wolf refuted the governor's claim that federal officers would be withdrawing from the city on a timeline.

Noting that officers had initially been deployed to Portland over the July 4th weekend to protect federal property, Wolf stated that federal officers would remain in the city as long as the courthouse appeared to be at risk of "nightly" attacks from demonstrators.