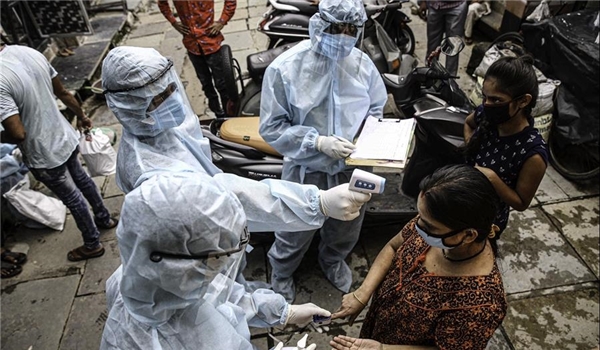 TEHRAN (FNA)- India's coronavirus death toll passed 35,000 on Friday, overtaking that of Italy, as floods affecting millions and killing almost 350 hampered the battle against the pandemic.

With 779 new deaths in 24 hours, the health ministry put total fatalities at 35,747, giving India the world's fifth-highest death toll behind the United States, Brazil, Britain and Mexico, according to an AFP tally.

Total infections in the world's second-most populous country are now 1.63 million, surpassed only by the US and Brazil, both of which have much smaller populations.

Many experts have cast doubt on India's official numbers saying that authorities are not testing enough people and that many coronavirus-linked deaths are not properly recorded.

A study this week that tested for coronavirus antibodies reported some 57 percent of people in Mumbai's teeming slums have had the infection -- far more than official data suggests.

Last week a similar study indicated that almost a quarter of people in the capital, New Delhi, have had the virus -- almost 40 times the official total.

Annual monsoon floods in Eastern and North-Eastern India that have displaced tens of thousands in the region were meanwhile hampering efforts to stop the deadly virus spreading.

In India's poorest state Bihar, home to 125 million people and one of several states to impose restrictions on activities, 11 people have died and more than 25,000 are crammed into relief camps.