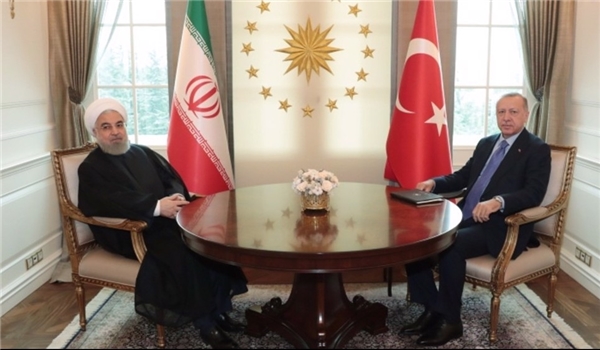 Pointing to the US cruel sanctions against the Iranian nation, he said that such conditions require more friendly relations and cooperation among neighbors.

President Erdogan, for his part, congratulated Rouhani on Eid al-Adha, and expressed hope that the feast would be a blessing for the two nations and all Muslims throughout the world.

He also stressed cementing trade and economic ties between Tehran and Ankara.

In relevant remarks in April, Iranian President Hassan Rouhani and his Turkish counterpart in a phone conversation underlined that the trade relations between the two countries should continue similar to the past amid the anti-coronavirus battle.

During the phone conversation on Wednesday April 22, President Rouhani stressed the need for strengthening mutual, regional and international cooperation, saying that efforts should be made to ensure that trade between the two countries continues in full compliance with health protocols.

He congratulated the arrival of the holy month of Ramadan to the Turkish Muslim people and government, saying that Ramadan is the month of blessing, mercy and forgiveness.

President Rouhani expressed the hope that the month would be a source of blessing for the two Muslim nations of Iran and Turkey as well as other Muslims around the world.

Coronavirus outbreak has created numerous difficulties for the governments and nations around the world, he said, noting that Iran and Turkey have proved that they have been alongside each other in hard times.

Rouhani also hailed Iran's valuable successes in the field of fighting coronavirus, stressing the need for interaction among the officials and exchange of experiences between the two countries.

He pointed to US cruel sanctions and severe pressures on Iran and creating obstacle in the way of IMF loan payment to the country under the difficult situation, and called on all the countries to adopt a clear and decisive stance against the US anti-human pressures.

Rouhani also described Iran-Turkey-Russia talks to implement agreements within the framework of Astana Process, saying that all should try to restore stability to Syria and regional nations.

President Erdogan, for his part, congratulated the Iranian people and government on the arrival of holy month of Ramadan, hoping that God would make Ramadhan a means of health and happiness, peace and tranquility among nations.

Describing Iranian government and nation's fight against coronavirus outbreak despite all problems as very valuable, he said, "We must work to ensure that trade between the two countries continues in accordance with the principles of health, and officials in both countries must work together in this respect."

Erdogan further noted that his country has always opposed to US cruel sanctions against Iran, adding that Iran and Turkey as the two friendly and brotherly countries will put behind these hard times as well.

He also called for efforts in line with establishing sustainable peace and stability in the region.