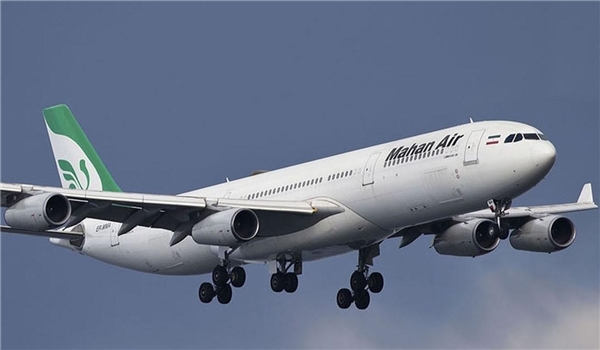 TEHRAN (FNA)- Iranian President Hassan Rouhani condemned the US for its fighter jets' hostile move against the Iranian passenger flight last Thursday night, describing it as “air terrorism” and “unacceptable”.

“The Americans have started another game and have resorted to insolence and dangerous mischief in the international airspace. How is it possible? So where is ICAO (International Civil Aviation Organization)? Where is the (UN) Security Council? Where is the United Nations? Where are the countries in the region? The countries where this violation took place in their air space and the flight was to their destination and everyone should speak. Is it possible in the free international corridor and in a specific aviation route that fighters fly next to a passenger plane in which women and children, big and small, are present? This is exactly air terrorism, without a doubt,” Rouhani said, addressing a cabinet meeting in Tehran on Wednesday.

“Anyone who sends a fighter has committed an aerial terrorist act and he/she should be dealt with as a terrorist. ICAO and the Security Council and other countries must confront it. Of course, the US has a record in taking such measures. Once again, in the final years of the (Iran-Iraq) war, we saw how our plane was shot down under false pretexts (Iran Air Flight 655 was a scheduled passenger flight from Tehran to Dubai via Bandar Abbas that was shot down on 3 July 1988 by an SM-2MR surface-to-air missile fired from USS Vincennes, a guided-missile cruiser of the United States Navy). We have this record. But it is unacceptable for us that such a thing has been done in the airspace of another country,” he added.

Rouhani said that the US embarks on such mischiefs and games because it has been defeated by Iran several times.

“We tell the White House leaders that there is merely one way for you towards Iran, and that is to enforce laws, rights, agreements and regulations and to compensate for the damages inflicted on people. You do not have any second way and if you think that our people will compromise towards you and your mischiefs, you are mistaken. If you think that we will compromise on our rights, you are mistaken,” he underlined.

Iranian Foreign Ministry Spokesman Seyed Abbas Mousavi said Iran's Ambassador to the UN Majid Takht-e Ravanchi has informed UN Secretary-General Antonio Guterres of the incident, and warned that "in case of any incident for this plane on the way back home, the Islamic Republic of Iran will take the United States responsible".

On Monday, Iranian Judiciary Chief Ebrahim Rayeesi said threatening aviation security and aggression against a passenger airliner is in blatant violation of international laws, and added that the only solution to end the US’ evil acts is to expel the Americans from the region.

"The hostile move against Iran’s passenger plane is a glaring violation of international rules," Rayeesi said, noting that the Prosecutor General and his Deputy for International Affairs will seriously pursue the complaints of the passengers of the Iranian Airbus.