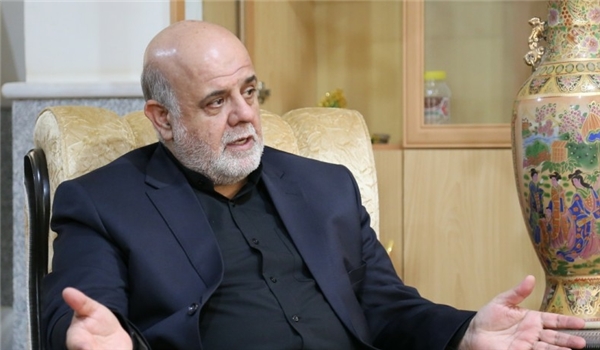 Masjedi made the remarks in a meeting with newly-appointed Iraqi National Security Advisor Qasim al-Araji late on Monday, and emphasized the two neighboring countries' commonalities.

He said more cooperation between the two countries will benefit both sides.

In a relevant event in early July, Iran’s Military Attaché to Iraq Mostafa Moradian and Senior Iraqi Lawmaker Mohammed Redha Al-Haidar in a meeting in Baghdad on Friday explored avenues for expanding security and defense cooperation.

During the meeting, the two sides underlined the need to implement the already signed military and defense agreements, urging the need to promote further cooperation in these areas.

Al-Haidar, also Head of the Security and Defense Committee in the Iraqi parliament, appreciated Iran’s support for Iraq during that country's fight against ISIL terrorist group, and said that it was an example of brotherliness between Iran and Iraq.

The Iranian military attaché voiced his country's continued support for the Iraqi nation and government.