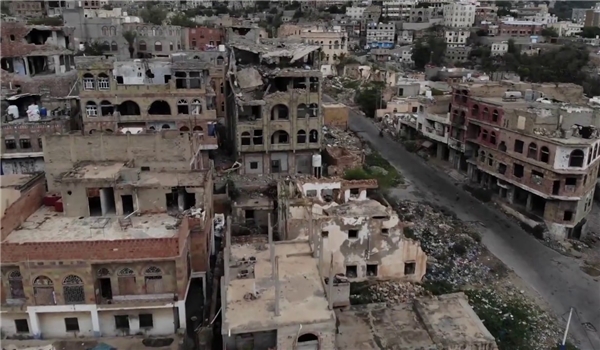 TEHRAN (FNA)- Despite the coronavirus pandemic, there has been no sign of any easing of the Saudi-led blockade of Yemen.

Also despite repeated UN demands over the past weeks for the Saudis to allow aid in, not only have the Saudis not accepted the repeated international calls for aid to be allowed in, there’s no sign that the Saudis have acknowledged the calls at all, seemingly ignoring the situation entirely as the civilian toll mounts.

This is while the US-backed, Saudi-led blockade has been a serious problem for northern Yemen, where a destroyed single port is expected to provide food, medicine, and fuel for some 15 million civilians, but which the Saudis have repeatedly blocked UN and other aid ships from entering.

This has only turned the country into a humanitarian disaster, where thousands of American bombs are being dropped, 1.5 million people are displaced and more than 90% of the population is in need of assistance. The major difference? In Yemen, the US is one of the primary causes of the problem.

The United States is actively aiding and abetting Saudi Arabia while the country indiscriminately kills civilians in what amounts to war crimes by almost anyone’s definition. The US, who often purport to care about democracy and human rights, is also helping the Saudi regime – one of the most repressive regimes on the planet – cover up those crimes at the United Nations.

These actions are abhorrent and make the US complicit in Saudi war crimes. It’s shameful the brewing scandal has hardly received any attention from the US political establishment or the news. They know and the whole world knows that the Saudis are even targeting hospitals using modern weapons supplied to them by US military contractors and weapons manufacturers.

The Saudis and their regional partners in crime are dropping those bombs using American-made fighter jets. The US military, far from being a neutral observer, is actively providing the Saudis with intelligence and logistical assistance for their air strikes. And the US has finalized a deal to give even more weapons to the Saudis. The Trump White House sold them more than $100bln of military weapons.

Worse still, the US has also successfully prevented the UN from conducting any independent investigation into the war crimes committed by Saudi Arabia. Instead, Saudi Arabia has been given license to investigate themselves, which is appalling.

That said, it’s never too late for the UN to step in and stop this madness before it gets too late. The UN Security Council should call for an end to the war and for the delivery of humanitarian aid and medicine to Yemen. The world body should also call for an arms embargo on Saudi Arabia.

This would be beneficial for the ongoing humanitarian crisis. The UN Office for the Coordination of Humanitarian Affairs says that there are now 1.5 million children who are acutely malnourished, with 375,000 of them suffering from severe acute malnutrition. Six million people receive rations from the UN World Food Program, which has had to scale back its operations because of the pandemic. The humanitarian crisis is one of the worst in the world.

Exiting this intractable war is not going to be easy, but it’s possible. Saudi Arabia has not been able to come to terms with the stalemate. It cannot win and it is not willing to give up this unwinnable war against the resistance movement of Ansarullah and their allies. Deep problems in Saudi Arabia’s economy, as well as regime-change defeats in Syria and Iraq, have put pressure on the house of King Salman and its American masters to change course. It is just a matter of time to see a full Saudi defeat, but the point is the precious Yemeni lives that are lost before the House of Saud acknowledges that its war has been useless.