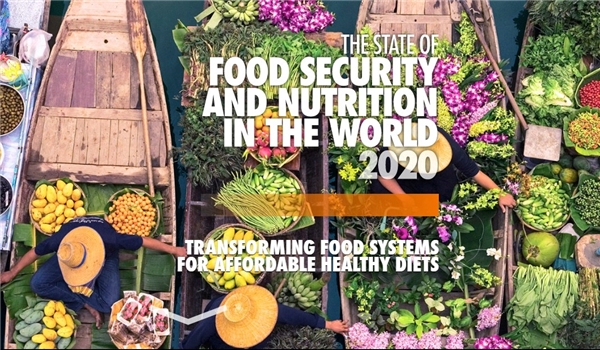 TEHRAN (FNA)- A new report jointly prepared by FAO, IFAD, UNICEF, WFP and WHO shows that currently around 690 million people or 8.9 percent of the world population are hungry.

Compared to the previous figures, this number is up by 10 million people in one year and by nearly 60 million in five years.

“The State of Food Security and Nutrition in the World 2020” also indicates that the number of people affected by severe food insecurity has experienced a similar upward trend over the last five years. In 2019, close to 750 million—or nearly one in ten people in the world—were exposed to severe levels of food insecurity.

The figures reveal that about 2 billion people in the world did not have regular access to safe, nutritious and sufficient food in 2019.

COVID-19 and Hunger
Considering the widespread impacts of COVID-19 pandemic, it is estimated that the pandemic may add between 83 and 132 million people to the total number of undernourished in the world in 2020 depending on the economic growth scenario.

Also, the nutritional status of the most vulnerable population groups is likely to deteriorate further due to the health and socio-economic impacts of COVID-19.

Children and Malnutrition
While the burden of malnutrition in all its forms remains a challenge for the world, current estimates reveal that in 2019, 21.3 percent (144 million) of children under 5 years of age were stunted, 6.9 percent (47 million) wasted and 5.6 percent (38.3 million) overweight.

Healthy Diet
The report states that healthy diets are unaffordable to many people, especially the poor, in every region of the world. The most conservative estimate shows they are unaffordable for more than 3 billion people in the world. Healthy diets are estimated to be, on average, five times more expensive than diets that meet only dietary energy needs through a starchy staple.

On the other hand, the diet-related social cost of greenhouse gas emissions associated with current dietary patterns is estimated to be more than USD 1.7 trillion per year by 2030.

Policies and Measures for Affordable Healthy Diet
The United Nations agencies call on countries to rebalance their agricultural policies and incentives towards more nutrition-sensitive investment and policy actions all along the food supply chain to reduce food losses and enhance efficiencies at all stages.

Nutrition-sensitive social protection policies are also central for the countries to increase the purchasing power and affordability of healthy diets of the most vulnerable populations.