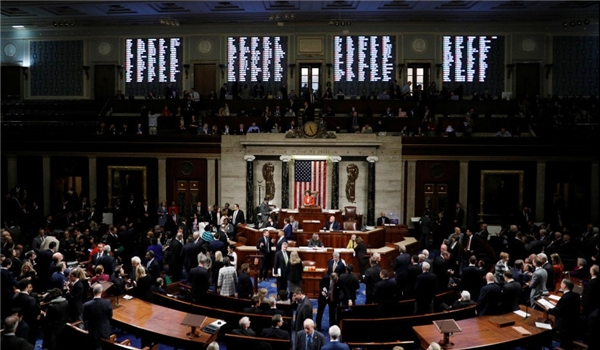 TEHRAN (FNA)- US lawmakers from the Senate and the House are using legislation to prevent the White House from pulling troops from Afghanistan, Syria, Yemen, South Korea, and Germany - unless the Trump administration certifies that a withdrawal will not harm US or allied interests.

They claim they are increasingly concerned about the decision-making behind President Trump’s withdrawal efforts — described as erratic, impulsive outbursts driven by domestic politics.

This clearly means American officials are still not ready for International Law and International Humanitarian Law. This is while most Americans agree that more needs to be done to protect international protocols, especially those related to the ongoing wars on Yemen and Syria.

After all, if most Americans are in favor of adhering to International Law, why are they supporting the Saudi-led war on Yemen? Obviously, peace is not a priority for Washington, and ending the war on the poorest country in the Arab world is not important to the US officials, including their impulsive and erratic president.

The United States continues to fuel Saudi-led coalition jets, according to figures obtained from the US military. This underlines the fact that US support for the regime-change campaign has continued and even increased despite growing condemnation of civilian casualties and war crimes by Saudis.

According to conservative United Nations estimates, they are responsible for thousands of civilian deaths in Yemen since the US support began. That represents more than 60 percent of all civilians confirmed killed in hostilities since 2015.

This comes despite the UN warning that the war on Yemen could spell catastrophe amid the global pandemic. Some 7 million Yemenis are on the brink of famine, including 500,000 severely malnourished children. The Saudi-American-imposed blockade and flight ban on Sana’a has left the entire north of the country cut off, and prevented international aid, journalists and human rights workers from entering the country.

The Saudis have worked closely with the United States to bomb civilians in Yemen. The Pentagon admits that US personnel interrogate prisoners held by the Saudi coalition, though they deny any knowledge of torture and abuses. This does in no way mean they are not complicit in such abuses.

All this and more reflects a US policy shift at Congress favoring a permanent war on Yemen. Meaning, even if all Yemeni warring factions come together and end the war, the Saudis and the Americans won’t. They will continue to refuel jets and target civilian objects with great impunity and no accountability. Just like in Afghanistan, the Yemeni soil will also continue to be a trying ground for American-made Saudi war planes and guns.

As is, America is always seeking to increase its influence and is waiting for such opportunities to rule under any circumstances, even if at the expense of starvation, disease or displacement of people on whose territory it creates illegal bases.

Under the direct orders of American lawmakers, war-party Washington is strengthening its military presence in Yemen to protect Saudi oil and Israeli regime which faced the 1973 war when Yemen closed the Bab al-Mandeb strait with the agreement of Egypt. The idea is to strip the regional countries of all their defense and weapon capabilities against Israel.

Whatever the pretext, this cannot be allowed to go on. It is a flagrant violation of International Law and an infringement of Yemen’s national sovereignty.