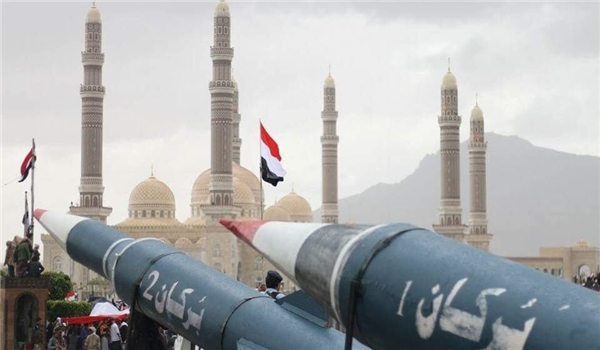 TEHRAN (FNA)- Yemen's Ansarullah Movement announced that its armed forces will soon unveil a new type of domestically-manufactured ballistic missile after it successfully hit the military targets inside Saudi Arabia.

General Amer hailed Yemen's major military operation that targeted a number of sites deep within the Saudi territory, including King Khalid airbase in the city of Khamis Mushait, an oil facility in Jizan industrial zone as well as military sites at Abha, Jizan and Najran airports and a military camp in Ma’rib Province.

Unlike previous operations that involved launching only one ballistic missile, the recent strike was conducted using a combination of missiles and drones, bin Amer said.

He also explained that the latest attack came in response to the Riyadh regime's ongoing bloodshed in Yemen, particularly the attack that took place in Hajjah Province in recent days.

"The enemy has tightened its blockade of Yemen and thus the armed forces have a duty to break the siege through military operations," bin Amer added.

He gave assurances that Yemen's operations are not blind as they do not target civilians, adding their strategic goal is to put a stop of the Saudi attacks and end the siege.

"We will soon unveil a new type of ballistic missile," bin Amer said.

In relevant remarks on Monday, Spokesman for Yemen’s Armed Forces Brigadier General Yahya Saree said the coordinated operation had come in response to the crimes committed by the Saudi-led coalition, specially in Hajjah Province.

General Saree also warned that the Yemenis "will not hesitate to carry out more painful strikes" until Saudi-led aggression ends the war and lifts the crippling siege.

Saudi Arabia waged a devastating military aggression against its Southern neighbor of Yemen in March 2015 in collaboration with a number of its allied states, and with arms support from certain Western countries.

The purported aim was to return to power Riyadh-backed former regime and defeat the Ansarullah movement that took control of state matters after the resignation of the then president and his government.

The war has claimed an estimated 100,000 lives over the past five years. The UN refers to the situation in Yemen as the world's worst humanitarian crisis.