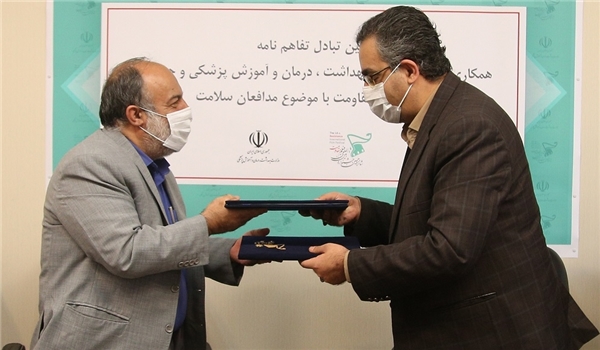 TEHRAN (FNA)- Head of Iranian Health Ministry's Public Relations Office, Kianoush Jahanpour, signs a memorandum of cooperation with the festival director, Mahdi Azimi Mirabadi, in his visit to the festival headquarters on Tuesday.

Based on the signed document, the Ministry of Health and Medical Education will support and cooperate with the festival to hold its section of Health Defenders.

Dr. Jahanpour called the battle against Covid-19 an act of resistance, saying “resistance is a superordinate concept one of whose manifestations is the sacrifice made by the health workers.”

He also praised festival’s move to include Health Defenders section in this edition of the festival, adding “cinema can document efforts made by the health workers.”

“There is a need to have a poetic and artistic insight toward the health defenders, and cinema facilitates the issue”, he elaborated on the role of cinema.

For his turn, the festival director, Mahdi Azimi Mirabadi, said the Health Defenders sector is “the pinnacle of the festival […] The section will tie the health defenders to the warriors of the Sacred Defense.”

The 16th Resistance International Film Festival considers itself responsible to showcase the image of the combat against coronavirus to the global audience.

This edition will be held in two sections of competitive and parallel events. The first section is slated for the Sacred Defense week (September 21 – 27) and includes Health Defenders, Festival of Festivals, and the Provincial Election of the Basiji Filmmakers. The applicants can register and submit their works through the website of the festival from June 9 to August 20.