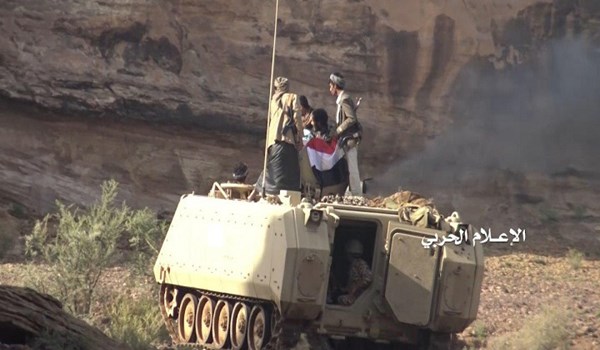 At the same time, Saudi Arabia continues to carry out airstrikes in the Northern parts of Yemen, destroying homes and killing civilians within.

As is often the case with such strikes, all the casualties are civilians, and women and children are among the slain. There is no indication why they are being attacked and the Saudis refuse to comment.

This lack of transparency from the Saudis is also par for the course, with Saudis not commenting on their own attacks, but emphasizing that Ansarullah movement fires across the border, though Saudis claim they intercept them all, though facts on the ground have already proved this latter claim to be groundless.

Saudi airstrikes have killed many thousands of Yemeni civilians throughout the illegal war, and despite international criticism of their targeting they insist that they are very accurate in their strikes. They have also ensured that they are allowed to investigate the killings, which always exonerates them.

The war-torn nation has been suffering for years because Saudis and their Western allies show no intention to stop glorifying the violence, pull back from the port city of Hodeida, and move on from the protracted conflict - amid a ceasefire agreement endorsed by the UN Security Council.

As well, the United States and its NATO allies had the chance to be a champion of peace in the Arabian Peninsula, yet they erroneously provided logistical support for the Saudi-led campaign of air raids and henceforth became complicit with Saudis in the world's worst humanitarian catastrophe.

The comparison couldn’t be grimmer. It is because of the deliberate actions and mistakes of all these Saudi-led players and their Western backers that tens of thousands of innocent civilians, including women and children, have been killed, millions of poor families have lost their homes, and the blockaded country is on the brink of famine and mass starvation amid the pandemic. What else did they expect? This was predictable right from the outset.

The Saudis and their allies are mistaken to assume that risking the lives of millions of civilians to disease, blockade and airstrikes is a price worth for the pointless intervention to restore to power former president Hadi. President Trump is also dead wrong to think his military support could help win the battle and protect America’s security and interests in the region.

Far from it, the ruthless war cannot be won and it’s a fantasy to insist otherwise. The warmongers should realize the vision of UN-brokered ceasefire agreement instead, and work for a solution to the humanitarian crisis. They should attend peace talks in good faith and without preconditions, and stick to any agreement reached there.

To put that in perspective, the Saudis and their allies should stop perverting facts. They must face their ambitions and stop looking for a reputable exit from this already lost war. As the war moves on, the Yemeni Ansarullah movement and army have grown more and more powerful as Riyadh comes to face the intolerable costs of this war. This should give them the chills and leave them with enough determination to bring the war to an unconditional end.

The time to face their modern ignorance, selfishness and exceptionalism is here and now. They shouldn’t ignore the reality on the ground as the present course of events show that the Saudis should expect a growing number of Ansarullah attacks on sensitive targets on their soil. The biggest threat to their Bin Salman's rule over Saudi Arabia is to step back and not confront and correct their mistakes. They must refuse to be in the same ill-fated position for another year. They must deal with their impulses and stop murdering civilians for regional politics, since they could very well be the eventual victim.