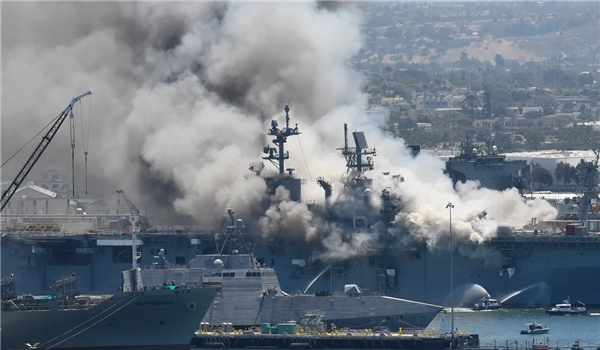 “This incident is an answer to your crimes, which has come about at the hands of your own elements,” General Qa’ani said, addressing a meeting of senior resistance commanders on Tuesday.

“God uses your own hands to punish you,” he added.

What is unfolding in the US today, specially the warship incident “is the (direct) result of the US administration’s (own) action, behavior, and atrocities,” General Qa’ani noted.

“They have been afflicted with divine wrath and retribution because they tried to skew the divine word and resorted to oppression,” he added.

General Qa’ani addressed the US and Israel, saying, “You are still experiencing your halcyon days. You have very tough days and occurrences ahead of you.”

He noted that the US military has turned into a “tired and decrepit” force, and its equipment has degraded into “scrap iron”.

Washington has to accept its dire conditions and stop oppressing the humanity and its own people, the Iranian General said.

He urged the Americans “not to waste their time looking for a culprit or leveling accusations against others” over what happened to the navy ship off San Diego.

“This is a fire they (Americans) have lit themselves,” General Qa’ani underlined, implying that the incident has been the result of the White House wrongdoings.

Fire broke out at Bonhomme Richard, an amphibious assault ship and light aircraft carrier, as it was anchored at the US Naval base in San Diego on Sunday.

The blaze was accompanied by at least one large explosion. The US Navy said the ship had been docked for scheduled maintenance between deployments.

Amid indications that the ship could continue burning for days, hundreds of American firefighters have been busy battling the blaze for two consecutive days. A large number of American sailors and civilians have been injured.