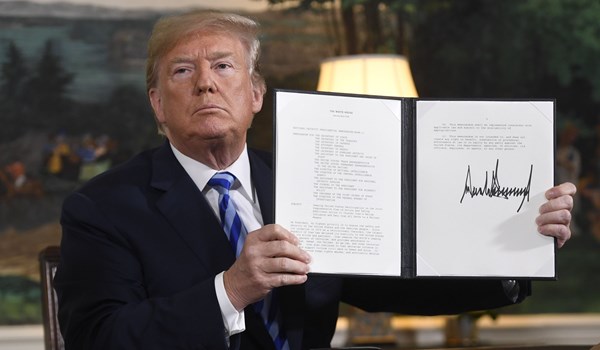 TEHRAN (FNA)- Iran's Ambassador to France Bahram Qassemi blasted the US for its unilateral withdrawal from the nuclear agreement it had signed in July 2015 and the problems caused later by the three European states (the UK, France and Germany) in the way of Implementing the Joint Comprehensive Plan of Action (JCPOA), and said that Tehran cannot be the sole party of the deal to fulfill its commitments.

"If Iran's partners in the 2015 nuclear deal cannot be loyal to their commitments, Iran cannot remain loyal to it as a single party," Qassemi wrote on his Twitter account.

Iran and the six major world powers (the US, the UK, France, Russia, China and Germany) reached a nuclear agreement, aka Joint Comprehensive Plan of Action (JCPOA), on July 14, 2015, after 13 years of intensive diplomatic talks. The US is no longer the participant in the deal as it withdrew unilaterally from the agreement on May 8, 2018.

"The United States has never been and is not trustworthy for implementation of agreements," Qassemi added.

The ambassador pointed out that since the beginning of the implementation of the JCPOA, the US was not responsible for being faithful to its commitments.

The US President Donald Trump left the deal unilaterally while his move was against the International Law, the Iranian envoy added.

"The US also encouraged other sides of the deal to leave the JCPOA, then imposed the highest level of sanctions against Iran in gross violation of the UN Security Council Resolution 2231," he said.

Resolution 2231 (2015) urges full implementation of the Joint Comprehensive Plan of Action on the timetable set by the Deal and sets forth the next steps for the eventual removal of Security Council sanctions on Iran.

"Although its move was against international regulations, the US threatened other parties to the JCPOA and members of the international community to follow its extraterritorial law," Qassemi added.

In a relevant development earlier in July, the Iranian foreign ministry had also lashed out at Washington for its inhumane sanctions which prevent other countries from exporting needed medicine for people in Iran who were wounded by chemical weapons used by the former Iraqi dictator's regime during the 8-year war (1980s).

"Today, through its inhumane sanctions, the United States has blocked access to the medicine needed for chemically-wounded victims," the foreign ministry wrote on its official twitter page.