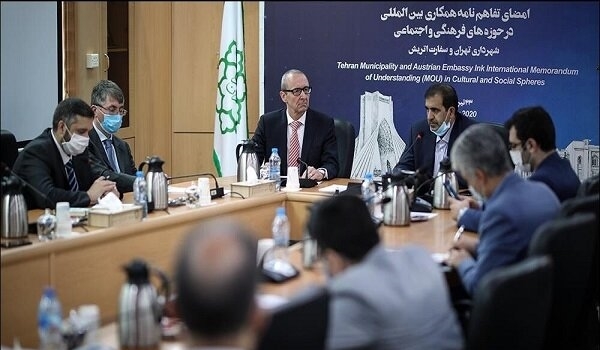 The MoU was inked between Tehran Municipality and the Austrian Embassy in the cultural and social fields in the Iranian capital city in a ceremony on Monday.

During the ceremony, Schulz said that Iran and Austria have a long history of diplomatic relations.

He went on to say that the mayor of Vienna was one of the first Western officials to visit Tehran after the Nuclear Deal was reached and pointed out that he signed an MoU on expanding cultural ties between the two Municipalities.

Referring to the one-hour videoconference between the mayors of Tehran and Vienna over the past week, he stated that both sides conferred on boosting ties in the fields of culture, sports and music, and scientific exchanges.

"The cooperation led to the sending of two rescue teams and the Red Crescent to Vienna, and they are now conducting international rescue operations around the world," he said, adding that, the cooperation between Iran and Austria in this field shows the depth of trust between the two countries.

In a relevant development last week, high-ranking Iranian and Austrian officials in a meeting in Vienna underlined the two countries' determination to further expand bilateral relations and mutual cooperation.

The meeting was held between Iran's new Ambassador to Austria Abbas Baqerpour Ardakani and Austrian deputy minister of economy and digital affairs.

During the meeting, they stressed the need for promoting trade and commercial relations between the two countries.

They decided to form working groups under the important document "Roadmap of Economic Relations", which was signed by the two countries in 2016, to pursue implementation of the agreements.

He conveyed the message of friendship by Iranian President Hassan Rouhani to his Austrian counterpart and full readiness of the Iranian government for the expansion of relations with Austria in all political, economic, cultural fields based on historical and long-standing relations between the two countries.

The Austrian president also extended his greetings to his Iranian counterpart, and voiced his readiness for the expansion of bilateral relations.