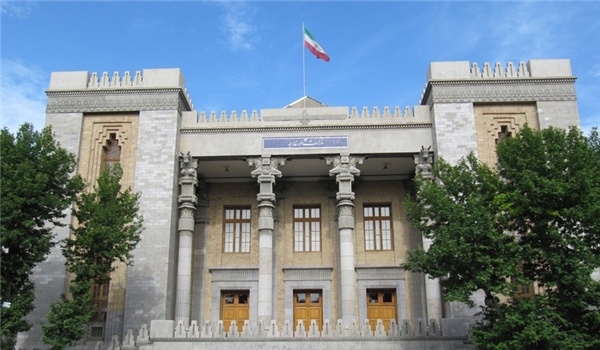 TEHRAN (FNA)- The Iranian foreign ministry underlined the country’s commitment to dialogue, noting that neighbors can always count on Iran as a trustworthy partner.

“In Iran, today is the national day for Dialogue and Constructive Engagement with the World. Since its foundation, the Islamic Republic of Iran has been developing cordial and balanced relationship with the world and resolving challenges through dialogue based on mutual respect,” the foreign ministry wrote on its official twitter page on Monday.

It added that the track record of dialogue on critical issues demonstrates Iran's seriousness, pragmatism about bringing peace and stability to world, stating that the “JCPOA is the product of Iran's openness to engagement, but the US reckless exit from the Deal has wreaked havoc on this multilateral accomplishment.”

“Despite the setback, Iran remains committed to diplomatic engagement, as it's been and will be a trusted partner to its neighbors and beyond,” the foreign ministry stressed.

It pointed to the Hormuz Peace Endeavor, or HOPE initiative, which was first proposed at the UN General Assembly in New York by President Hassan Rouhani, and said, “Iran has long proposed several inclusive peace plans in Middle-East; the latest one is HOPE. Always believe in dialogue.”

Speaking to Aljazeera while in Qatar to attend the 2019 Munich Security Conference (MSC) in Doha, Zarif once again invited the regional countries to join the Iran peace initiative, dubbed as HOPE, as outlined by the President Rouhani at the UN General Assembly meeting.

The top Iranian diplomat also warned the United States that a war would benefit no one, while underlining that the US President Donald Trump cannot impose a unilateral agreement on Iran.

In relevant remarks last September, Zarif had underlined that the Hormuz Peace Endeavor (HOPE) floated by Iranian President Hassan Rouhani at the UN was vital to prevent war and terrorism in the region.

Zarif made the remarks, addressing a meeting of United Nations Security Council on “UN Cooperation with Regional Organizations” in New York.

He urged the countries in the region to join HOPE initiative which is designed to include all countries of the region and aims to expand cooperation beyond regional security.

"The Initiative is based on the fact that all regional states are duty-bound to ensure peace, stability and prosperity in the region. They along with the global community have common interests in maintaining freedom of navigation and transfer of energy," Zarif said.

The Iranian diplomat stressed that regional cooperation is the key for preventing war, violence, extremism, terrorism and sectarian tensions.

Commenting on objectives of Hormuz peace initiative, he said that promoting solidarity, mutual understanding and peaceful and friendly relations and cooperation among regional states as well as boosting collaboration in uprooting terrorism, extremism and sectarian tensions and making sure about energy security, freedom of shipping and free flow of oil were among the objectives of the initiative.

Zarif went on to say that regional cooperation was necessary for fighting terrorism, particularly in areas such as the Middle East and Afghanistan where terrorist groups are more active than any other places.