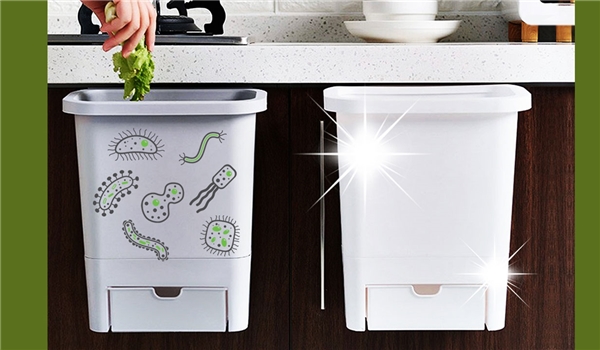 The product has been made in full accordance with Iran's INSO21145 standard.

It has been made of 'Food Grade' and 'BPA-free' materials and of Zinc oxide nanoparticles (ZnO).

The Nano dustbin enjoys a perfect design and a low price, in comparison with foreign rivals.

The term, Food Grade, refers to the materials used in equipment. Food grade materials need to be non-toxic and safe for consumption.

In addition, a product is called BPA free when it does not use the organic compound Bisphenol A in its construction. Many plastic products such as baby bottles, plastic plates and cutlery, storage containers, and drink bottles are made with BPA.

In a relevant development it was announced in February that a skin care nano-production, which is capable of absorbing ultraviolet radiation, produced by an Iranian company is currently being exported to destinations in Africa and Middle East.

Hamidreza Dastjerd from the Research and Development section of this company explained that extremely harsh sunlight can cause a lot of damage to the skin, which can be avoided by using petroleum jelly to protect the skin, and repair the damaged ones.

“We added nano-scaled zinc oxide to petroleum jelly so that it would protect the skin against ultraviolet radiation,” he said.

According to him, the nano-enhanced petroleum jelly, which is commonly known in Iran as ‘vaseline’, is produced and distributed in the market in capacities of three tons a month.

He noted that this kind of oil-based ointment is currently being exported to African and Arab countries, such as Jordan and the United Arab Emirates.

Iran is the fourth top country of the world in the field of nano-technology in competition with China, India and South Korea, Head of the 3rd Nanotechnology and Nano-Medicine conference Mehdi Rezayat declared in January, adding that the neighboring countries are trailing far behind the Islamic Republic.