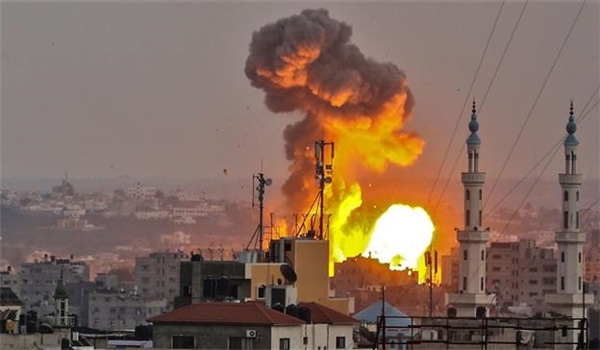 TEHRAN (FNA)- Israeli warplanes carried out fresh airstrikes against the Gaza Strip, bombing locations in the East of the besieged enclave.

The Israeli military says the warplanes and helicopters have stricken the positions of the Islamic Resistance Movement, Hamas, in Gaza Strip late on Sunday night, according to presstv.

An Israeli military spokesperson claimed in a statement that the Hamas targets hit by the warplanes include "underground infrastructure".

The spokesperson also claimed that the attacks were in reaction to three rockets allegedly fired from the besieged enclave at Southern parts of the occupied territories. No group has claimed responsibility for the attack.

There were no immediate reports of casualties caused by the Israeli air raids.

The fresh attacks come as Hamas has called on other Palestinian groups in the occupied West Bank to join hands and start an armed struggle against the Israeli occupation.

Mahmoud al-Zahar, a co-founder of the Islamic Resistance Movement Hamas and a member of the group's leadership in the Gaza Strip, says all Palestinian groups must follow the successful model implemented in the liberation of the Gaza Strip, namely armed struggle, in order to counter Tel Aviv's expansionist policies in the West Bank.

Speaking to the Lebanese TV channel Al Mayadeen on Thursday, al-Zahar said the Palestinian Liberation Organization (PLO) must stop implementing its Oslo Accords with the Israeli regime, and take up arms against the occupiers.

Meanwhile in the occupied West Bank, clashes broke out between Israeli forces and Palestinians protesting against a plan by Tel Aviv to annex parts of the West Bank.

The Palestinians had gathered in Hebron, also known as al-Khalil, to protest against Tel Aviv’s plan to annex parts of the occupied West Bank when Israeli troops used tear gas and rubber bullets to disperse them.

The demonstrators, in turn, threw rocks and Molotov cocktails at Israeli vehicles.

Tel Aviv is seeking to annex its settlements built in the West Bank as well as the Jordan Valley in a decision that has drawn widespread criticism from the international community.

The United Nations has called the plan a violation of international law. Several European countries have also opposed the US-backed project.

TEHRAN (FNA)- A federal appeals court ruled on Friday that House Democrats can proceed with a lawsuit over President Donald Trump’s diversion of $2.5 billion in Pentagon funding to build a US-Mexico border wall.

TEHRAN (FNA)- France on Friday reported 2,288 new coronavirus cases in the last 24 hours, the biggest daily spike since the end of April.

TEHRAN (FNA)- The Lebanon's Ministry of Health announced on Saturday that over 60 people are still missing and at least 120 are in critical condition after a huge explosion rocked Beirut on Tuesday.

TEHRAN (FNA)- Mayors of Iran’s major cities conveyed their heartfelt condolences to the mayor of the Lebanese capital of Beirut, where a major blast killed 157 people and injured thousands of others earlier this week.

TEHRAN (FNA)- Violent clashes this week between protesters and police in the United States city of Portland, Oregon, ratcheted up tensions in the city days after an agreement between state and federal officials appeared to bring calm.

TEHRAN (FNA)- The government of Hong Kong called the US sanctions against 11 high-ranking officials from mainland China and Hong Kong despicable and shameless, according to the statement on the government website.

TEHRAN (FNA)- The United States recorded more than 2,000 COVID-19 deaths in a 24-hour period as the death toll surpassed 160,000 and Dr Anthony Fauci warned there is 'trouble ahead' for some cities if they don't act now to stop the spread.

More Than 10,000 British Airways Workers Being Made Redundant

TEHRAN (FNA)- More than 10,000 British Airways workers are being made redundant, it has been confirmed.

TEHRAN (FNA)- The death toll in Friday evening's plane crash in South India rose to 18, including the two pilots, as two investigating teams have reached the site to find out the exact reason of the mishap.

TEHRAN (FNA)- Japan confirmed a record 1,597 new coronavirus infections on Friday, as cases continue to mount throughout the country, particularly in urban areas like Tokyo and Osaka.

TEHRAN (FNA)- Iranian Ambassador to Russia Kazzem Jalali offered his sympathy to his Lebanese counterpart Shoghi Boonasr over the Tuesday massive explosion in Beirut, and emphasized Tehran’s support and solidarity with the country’s people and government.

TEHRAN (FNA)- With months to go until one of the most unprecedented elections in American history, anything can happen — but at least one new prediction has forecasted a resounding victory for Joe Biden, the presumptive Democratic nominee.