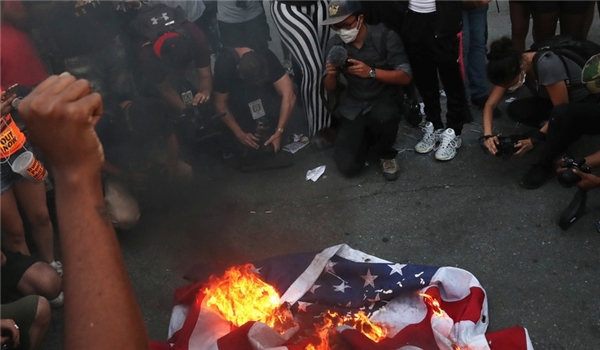 Video shows the flag being burned in Black Lives Matter Plaza, just outside the White House. Activists can be heard chanting, "One, two, three, four, slavery, genocide and war. Five, six, seven, eight, America was never great", according to The Hill.

The flag-burning was organized by the Revolutionary Communist Party. A speak out before the event was held by Refuse Fascism, which also held protests nationwide on July Fourth calling for the removal of Trump and Vice President Mike Pence from office. Refuse Fascism posted on its website that it also created and then tore down a "statue" of Trump outside of Trump Tower in New York.

Both groups have frequently spoken out against the Trump administration and its policies.

The demonstration outside the White House comes as many citizens reflect on Independence Day in the context of nationwide protests against police brutality and racism. Some of those protests have featured calls to tear down Confederate statues or monuments that commemorate figures who supported slavery.

Trump has criticized such protesters, including in his speech at the "Salute to America" where he called out the "radical left".

"We are now in the process of defeating the radical left, the Marxists, the anarchists, the agitators, the looters, and people who in many instances have absolutely no clue what they are doing," he stated in his address.

The American president has also fiercely criticized flag burning, noting last month those who burn the American flag should go to jail.

Burning the American flag is not illegal, however, and the Supreme Court ruled in the 1989 case Texas v. Johnson that the action is protected by the First Amendment.