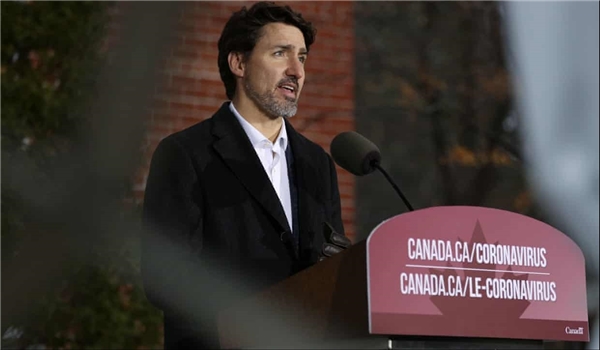 TEHRAN (FNA)- Justin Trudeau is pointing to the threat of fresh US tariffs and the coronavirus pandemic as reasons why he might skip a meeting in Washington next week with President Donald Trump and Mexico's Andrés Manuel López Obrador to mark the new continental trade deal.

The Canadian prime minister made the comments Friday when asked by a reporter about his invitation to meet with his North American counterparts to commemorate the trade pact, which came into force this week, POLITICO reported.

Trump and López Obrador are scheduled to meet on July 8-9. Trudeau appears prepared stay home from the USMCA celebration.

“We’re still in discussions with the Americans about whether a trilateral summit next week makes sense,” Trudeau told a press conference near Ottawa.

“We’re obviously concerned about the proposed issue of tariffs on aluminum and steel that the Americans have floated recently. We’re also concerned about the health situation and the coronavirus reality that is still hitting all three of our countries,” he noted.

The US has been pressuring Ottawa to put quotas on Canadian aluminum exports to slow a rush in shipments, or face the reintroduction of a 10 percent tariff, multiple people familiar with the issue told POLITICO last week.

The US imposed steel and aluminum duties on Canada and Mexico for a year, citing national security grounds, before lifting them for both countries in 2019. Canada had retaliated with tariffs of its own on US goods.

The agreement, however, to remove the levies stated the US could reimpose them after consulting with Canada and “in the event that imports of aluminum or steel products surge meaningfully beyond historic volumes of trade over a period of time”.

The reintroduction of US tariffs would create new cross-border tensions and likely lead to new retaliatory duties from Canada.

Earlier this week, Trudeau warned that if the Trump administration put tariffs back on Canadian aluminum it would raise input costs for American manufacturers and hurt the US economy.

“We have heard obviously the musings and proposals from the United States [that] perhaps there needs to be more tariffs on aluminum,” he told reporters Monday.

“What we simply highlight is the United States needs Canadian aluminum. They do not produce enough, nowhere near enough aluminum in the States, to be able to fill their domestic manufacturing needs,” he added.

The pandemic is another issue Trudeau must consider before any trip to Washington.

On Friday, Trudeau was also asked if visiting the US would mean he would have to self-isolate upon his return.

“These are obviously conversations that we’re having both with the Americans and with public health officials here in Canada,” he said, adding, “But I can assure you that at all times we will follow all the rules and all the advice of public health.”