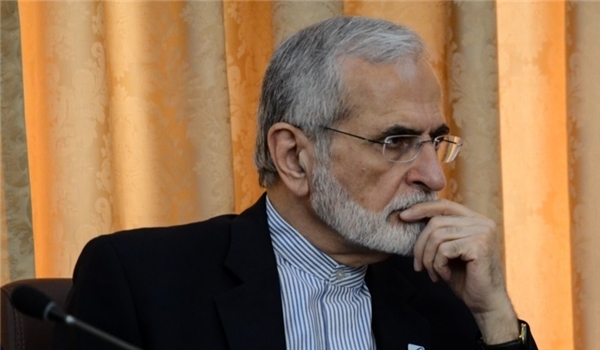 "The unilateral and misguided policies of the three European member states of the JCPOA, led by the US, to stop Iran's peaceful nuclear activities have always backfired, as Iran has been more determined to develop its nuclear technology," Kharrazi said.

He reiterated that the US push to extend Iran's arms embargo in the UN Security Council and the three European countries' anti-Iran move in the International Atomic Energy Agency, as well as the suspicious behavior of the IAEA director general will not only fail to deter Iran, but it will undoubtedly lead to the collapse of JCPOA as well.

"Now that International Atomic Energy Agency Director-General Rafael Grossi has met US Representative on Iran Brian Hook shows the extent of Mr. Grossi's dependence and his lack of independence," Kharrazi said, adding that the IAEA chief is recklessly coordinating his actions with the conspiracy center against Iran.

He underlined that the West should know that neither economic sanctions nor arms embargo will deter Iran from pursuing an independent strategic path.

"Iran has so far pursued its policy of self-sufficiency in the face of maximum Western pressure and has achieved undeniable successes in producing defensive weapons it needs," Kharrazi added.

In relevant remarks on Wednesday, Iranian Deputy Foreign Minister for Political Affairs Seyed Abbas Araqchi in reaction to a meeting between Grossi and Hook reminded the IAEA chief of the need for impartiality and professionalism.

Speaking in reaction to a photo op by Grossi and Hook, Araqchi addressed the IAEA chief and wrote on his twitter page on Wednesday that "you are better to keep both social distance and political distance".

He also reminded him of the two principles of impartiality and professionalism in the IAEA.

Rabiyee lambasted politicization of the international bodies’ reports over Tehran’s nuclear activities, saying, “We expect the members of the IAEA’s Board of Governors to support the independence of this international body against the US’ bullying."