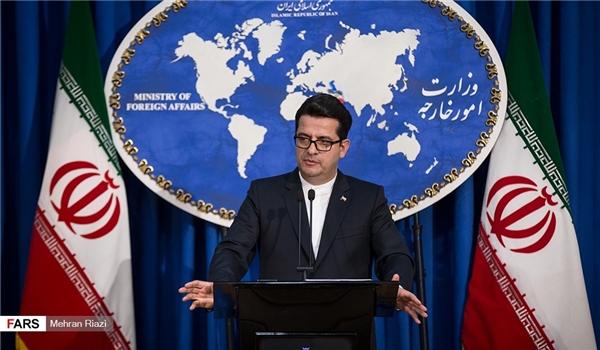 TEHRAN (FNA)- Iranian Foreign Ministry Spokesman Seyed Abbas Mousavi blasted the remarks by US Special Envoy for Iran's Affairs Brian Hook in his visit to the region, stressing Tehran's determination to continue reinvigoration of its military power and might by means of domestic capabilities.

Mousavi made the remarks on Wednesday in a reaction to the statements by Hook, his divisive mission to the countries of region and his threats against the Islamic Republic of Iran.

"Military option on the Americas’ table is a moldy option that has been on the table of delusional US presidents for years,” he said.

Mousavi called the allegations made by Brian Hook "baseless and unfounded", and condemned them strongly.

Concurrent with the desperate attempt to justify issue of extension of Iran’s arms embargo, Brian Hook talks about the military option on Iran, he said, adding, “The US military option against Iran is a moldy option which have been on the table of US delusional presidents for years.”

The principled policy of the Islamic Republic of Iran in the military sector is quite clear and the nature of these programs are completely defensive, Mousavi emphasized.

The destructive and destabilizing presence of the United States, turning the region into military bases, preventing the region from progressing and developing by creating divisions and intimidation in order to easily sell products of US military industries are the real threat to the region, he stressed.

As long as the US officials talk too much about the military option against the Iranian people and delay their forces' withdrawal from the region, the Islamic Republic of Iran will spare no legitimate effort to strengthen its military might by relying upon its domestic capacity, Mousavi said.

The Islamic Republic of Iran considers this its inalienable right to defend the national interests of Iranians, he added.

In relevant remarks last month,  Secretary of Iran's Supreme National Security Council (SNSC) Ali Shamkhani blasted the US officials for their double-standard approach and playing blame game on other countries, and said that they are threatening the global security.

"The triangle of US President Donald Trump, US Secretary of State Mike Pompeo and US Special Representative for Iran Brian Hook has created an image of the US administration that its allies consider it unreliable, its rivals consider it threat and its citizens consider it inefficient and incompetent," he added.

Shamkhani reiterated that the rule of irrational inefficient one is the source of the threats, only.

After the US unilateral decision to withdraw from the Joint Comprehensive Plan of Action (JCPOA) in 2018, the US officials, including Trump, Pompeo, and Hook have launched a so-called maximum pressure campaign against the Islamic Republic of Iran.