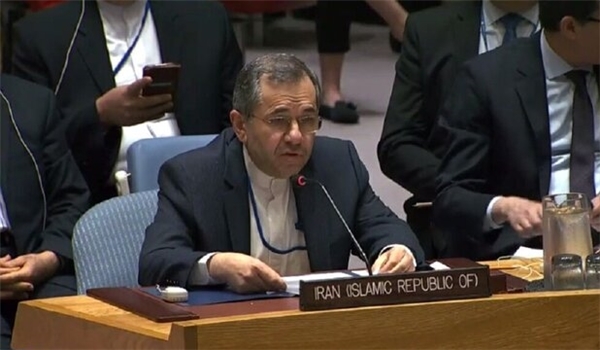 TEHRAN (FNA)- Iran’s Ambassador and Permanent Representative to the United Nations Majid Takht Ravanchi underlined that members of the United Nations Security Council have reiterated support for the UNSC resolution 2231 despite the US' efforts to extend arms embargo on the Islamic Republic.

"Today, #UNSC members reiterated, again, their support for #JCPOA and UNSCR 2231," Takht Ravanchi wrote on his Twitter account on Wednesday.

"Their speeches proved that they do NOT support the US' move to extend arms embargo on Iran as it violates 2231," he added.

The senior diplomat stressed that the US should withdraw from its ill-fated draft immediately; before it is rebuffed yet again.

In relevant remarks on Tuesday, Iranian Foreign Minister Mohammad Javad Zarif said if the UNSC falters again, it will be a generational setback for the cause of multilateralism and the rule of law.

"And yet, not a single Council session has been convened to reprove the US Government, or to at least investigate its repeated violations, adding that instead, some European members of the Council are contemplating further undermining the Resolution and the Council while further reneging on their own JCPOA commitments," Zarif added.

He reiterated that to cover this up, the US has—with some of its enablers—pressured the Secretariat to adopt a perverse reading of Resolution 2231—rejected by 3 JCPOA Participants, which is the polar opposite of the clear affirmation by the Security Council “that conclusion of the JCPOA marks a fundamental shift in its consideration of this issue.

The UN Security Council video conference examining the implementation of the UN Resolution 2231 on Iran's nuclear deal was held on Tuesday evening.

The session came amid US efforts to extend arms embargo on Iran which is due to expire in October according to Resolution 2231.