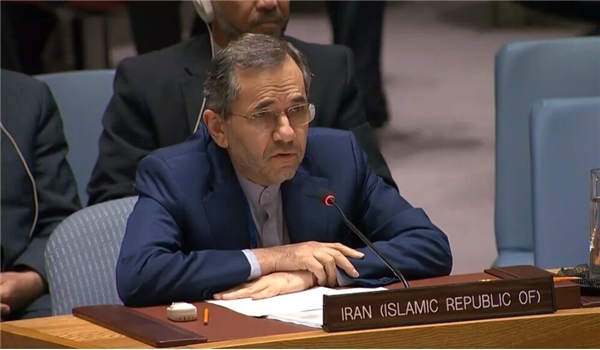 TEHRAN (FNA)- Iran's Ambassador and Permanent Representative to the United Nations Majid Takht Ravanchi voiced optimism that members of the UN Security Council will once again voice their support for the Joint Comprehensive Plan of Action (JCPOA) in a session to be held on Tuesday.

“Americans will again hear the support of UN Security Council and the international community for the JCPOA and Resolution 2231,” Takht Ravanchi said on Tuesday while referring to today’s session of the body which will be held through video-conferencing on Resolution 2231.

Iranian Foreign Minister Mohammad Javad Zarif is also slated to address the session. The session comes amid US efforts to extend arms embargo on Iran which is due to expire in October according to Resolution 2231.

“US efforts to extend UN arms embargo on Iran is in clear violation of the Resolution 2231,” Takht-Ravanchi highlighted.

He went on to say that leaders of world countries and UN Secretary-General have times and again voiced their support for the implementation of the JCPOA which indicates a ‘clear opposition’ to the US’ stance.

“It is unprecedented for a permanent member of the UN Security Council to act against a resolution which it had founded. Worse is that it seeks to punish those who implement that document. This is a sign of creating chaos in the international order and Americans are seeking that," he added.

Takht Ravanchi said that the Americans are trying to achieve what they perceive as their own interest even if their measures are against international law.

"Their main aim for extending the arms embargo on Iran is to destroy the JCPOA and they know that the UNSC is not buying this proposal," he further added.

Resolution 2231 (2015) urges full implementation of the JCPOA on the timetable set by the Deal and sets forth the next steps for the eventual removal of Security Council sanctions on Iran.

Iran and the six world powers (US, UK, France, Russia, China and Germany) signed a landmark nuclear agreement, aka JCPOA, on July 14, 2015, after months of intensive talks.

But the US withdrew unilaterally from the deal on May 8, 2018, and imposed sanctions on Iran at the highest level of its kind.