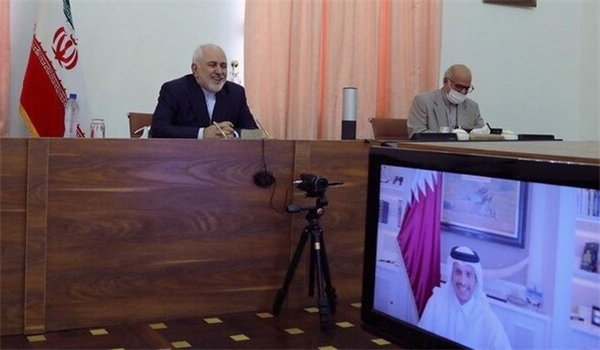 Zarif and Al Thani discussed issues related to the holding of the seventh meeting of the Joint Economic Commission.

The Iranian foreign minister, meantime, voiced his country's readiness to share its experiences of fighting the deadly coronavirus with Qatar.

During the videoconference, the two sides also discussed the latest regional and international developments.

In a relevant development, Zarif and  Al Thani met in Tehran in January.

“The Islamic Republic of Iran precisely monitors and pursues the Americans’ activities and moves but will never start any clashes and tensions in the region,” President Rouhani said in the phone conversation.

During the phone talks, the two high-ranking officials described Iran-Qatar relations as positive and growing, stressing the need for strengthening and consolidation of ties in all fields.

They also felicitated the start of the holy month of Ramadan to each other and both Muslim nations.