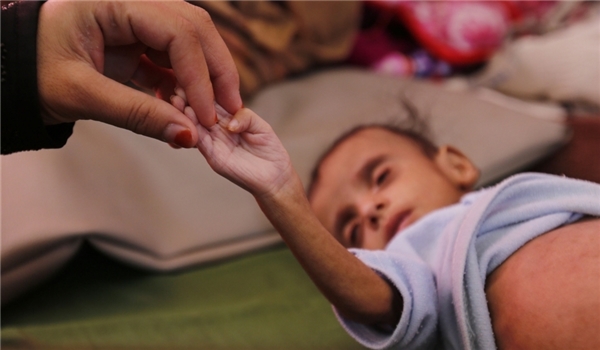 TEHRAN (FNA)- A new report by UNICEF says the number of malnourished children in war-torn Yemen could reach 2.4 million over the next six months.

Amid the global pandemic, millions of children in Yemen are at risk of starvation amid the coronavirus pandemic, which is tipping the war-torn nation into further devastation.

The United Nations is now appealing for nearly $500 million in urgent humanitarian assistance.

UNICEF, the UN children's fund, also says the number of malnourished children in the country could reach 2.4 million - a 20 percent increase - by the end of the year.

Another 6,600 children under the age of five could also die from preventable causes, as the pandemic has weakened the country's struggling healthcare system and disrupted services. Sadly, countless childhoods have also been lost in this five-year war and the fear is that many more will be lost as COVID-19 spreads.

The Saudis and their allies cannot overstate the scale of this emergency as children, in what is already the world's worst humanitarian crisis, battle for survival as COVID-19 takes hold. If they do not receive urgent funding and medical aid, children will be pushed to the brink of starvation and many will die.

The UNICEF report says almost 9.58 million children do not have sufficient access to safe water, sanitation or hygiene, putting them at a greater risk of infection, while 7.8 million do not have access to education amid the school closures.

Five years of illegal war on Yemen has had its toll on civilian infrastructure as well, including schools, hospitals and markets, thanks largely to the indiscriminate air strikes by the Saudi-led coalition, backed by the United States and NATO partners.

The Middle East's poorest nation has seen its economy decimated as a result, leaving millions unemployed and 80 percent of the country in need of humanitarian assistance. The coronavirus pandemic has only exacerbated the situation. The situation has only got worse by the land, sea and air blockade.

At a closed UN Security Council meeting last week, UN humanitarian chief Mark Lowcock warned many more people will starve to death, succumb to COVID-19, die of cholera and watch their children die because they have not been immunised for killer diseases.

The coronavirus is spreading rapidly across Yemen and about 25 percent of the country's confirmed cases have died - five times the global average.

At a June 2 virtual donor conference, mainly Arab and Western countries pledged $1.35bn for aid operations in Yemen, far less than the $2.4bn the UN had asked for, and the $3.6bn the UN received last year.

This is while no funds have reached the Ansarullah-held regions, which is why in those areas the situation is even worse.

UNESCO should launch a global campaign to challenge the perception of normality. Put together, these facts should make the world community question their ideas about what is “normal”. They have accepted the unacceptable for far too long.

The reality cannot be considered normal any longer, now is the time to make a change. It all starts at the UN where a resolution is needed to end the conflict to allow international aid such as food and medicine to reach the affected regions.

The United States is a party to this monstrous misconduct by providing direct support to the Saudi coalition, including refueling planes during bombing raids, intelligence, airborne fuel tankers and thousands of advanced munitions.

International legal scholars and US lawmakers have warned that this continued US support - including through weapons sales - may not only make the US government complicit in coalition violations of the laws of war, but also expose US officials to legal liability for war crimes.

US officials providing assistance to be guilty of aiding and abetting coalition war crimes are aware of the fact that their aid is used to assist unlawful attacks against civilians, and that the Saudi forces they are assisting commit war crimes.

Many of these violations have been reported by the United Nations, as well as human rights organizations, and White House officials cannot  debate that with some half-hearted comments.

They know that US support to the Saudis makes US personnel criminally liable. The State Department’s top human rights officers have already conceded a “possibility of legal jeopardy for US officials if arms sales continue despite continuing evidence of violations of the laws of war.” The State Department officials have also maintained that as the armed conflict in Yemen continues and evidence of war crimes mounts, legal risk for US officials will only increase.

This is why the UN should force Washington to end its criminal involvement and exert pressure on Saudis to end their monstrous misconduct, a disgrace that brings shame to the global community. There is no mystery here. The Saudis cannot continue the war without the unconscionable assistance and complicity from the War Party in Washington – or the diplomatic impunity at the UN Security Council.