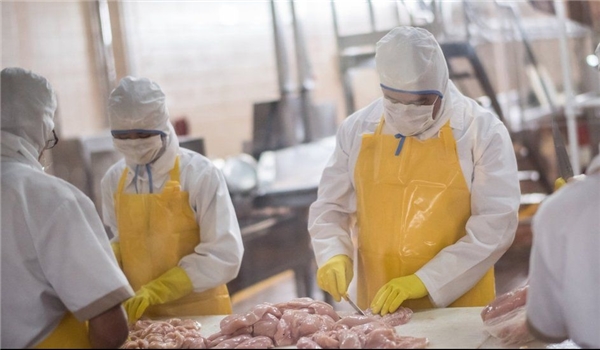 TEHRAN (FNA)- More than 4,000 workers have been infected with coronavirus in 37 outbreaks in abattoirs and meat factories in Europe, leading to at least nine factory closures, analysis found.

Staff working close to each other in low temperatures is thought to be the cause, but the UK government and Public Health England are reported to be looking at evidence from around the world linking meat plants to COVID-19.

At the same time, an undercover worker at American factories has described how stressful employment conditions leads to high dropout rates.

Last week, Germany was forced to reimpose lockdown measures after more than 1,500 workers at one of Europe’s largest slaughterhouses were found to have coronavirus.

It was the largest of at least 37 outbreaks since March in European abattoirs and meat-packing plants, Greenpeace’s Unearthed team found.

In the UK, more than 60 staff at a factory supplying meat to Asda in West Yorkshire were infected. Two food-processing plants in Wales also suffered separate outbreaks, including a chicken factory in Anglesey where at least 150 employees tested positive.

And a pork factory in the Midlands last week said around a dozen staff had tested positive.

In Ireland, authorities have reported 1,114 COVID-19 cases across at least 20 outbreaks in meat plants, Unearthed found. Clusters have also been reported in factories in the Netherlands, France and Spain.

In the US, Neal Barnard, founder of the Physicians Committee for Responsible Medicine, said slaughterhouses were “hotbeds” for COVID-19.

At least 33,823 meat workers in that country have tested positive, at least 116 of whom have died, according to the Food and Environment Reporting Network.

More than half the coronavirus cases in the state of South Dakota were at one slaughterhouse.

Sean Thomas, of Animal Equality US, who worked undercover in various abattoirs, explained how the conditions were stressful.

“At a typical US slaughterhouse you might have 1,000 people working at one time,” he said, adding, “You have to go very fast. They said, ‘We need you to hang 33 birds every minute’.”

“You have no room to move at all from the person crowding next to you and everybody is going as fast as they can," he said.

“The company brought new people in every night because so many people would say, ‘I can’t do it. I have no break, no time to rest my arms or step away. I can’t go to the bathroom if I need to’. The intensity of the work is something most people can’t understand,” he added.