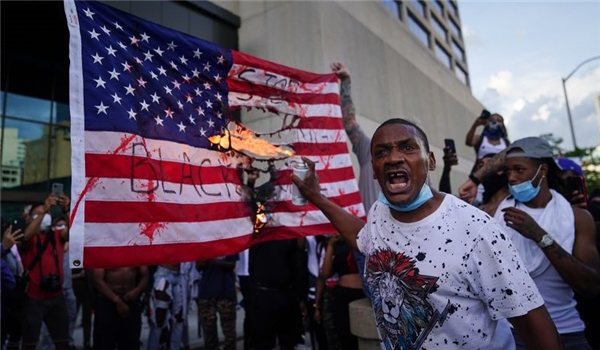 TEHRAN (FNA)- Protesters burned an American flag hung outside of the Justice Center in Portland, Oregon, and replaced it with a Black Lives Matter sign on the 30th straight day of anti-racism demonstrations in the city.

A protest led by Rose City Justice brought more than a hundred people outside the steps of the Multnomah County Justice Center, which has become a popular spot for demonstrations, Daily Mail reported.

There, tensions flared as the city entered another night of demonstrations against police brutality, racism and the death of George Floyd.

At around midnight a group of protesters pulled down the American flag hung outside the Justice Center.

Cell phone footage shows two protesters using what appeared to be lighter fluid and some sort of aerosol spray to further ignite the already burning flag.

Other were heard chanting 'no KKK, no fascist USA' while the flag burned.

Later in the night, the same group hoisted a "Black Lives Matter" sign with colorful wire lights up the flagpole instead, prompting loud cheers from demonstrators.

Similar acts of arson were conducted over the week, with the Portland Police Bureau's North Precinct being lit on fire Friday and sidewalk garbage cans set ablaze.

Protesters on Thursday attempted to convert the space outside the precinct into an "autonomous zone" similar to Seattle's CHAZ area.

And on Saturday protesters began the night by erecting makeshift barricade out of discarded fencing and plastic street dividers to block off a nearby intersection, according to a police press release.

Authorities had a hasty response and arrived to the scene and declared the gathering an unlawful assembly by 10:30pm.

The department alleged that a "woman with a hand held speaker was heard calling for violent resistance from the crowd" when they arrived.

Deputies reportedly used riot control munitions to clear out protesters, but it's unclear what type of munitions were used.

Loud booms and smoke were reported by witnesses, KOIN reports.

Deputies eventually seized the barricade before appearing to leave Champman Square, but that didn't quell continued tensions between law enforcement and civilians.

"Officers responded to the intersection and made efforts to move the crowd away from the barricades so they could be cleared and the street could re-open," the press release stated.

"During this engagement, officers had rocks, glass bottles, and paint thrown at them. Lasers and lights were directed at the officer's eyes," according to the press

Confrontations reportedly happened in the blocks surrounding the Justice Center. At one point, protesters and police appeared to have a standoff near a 7-Eleven store around 3am.

Photos shared by the department showed several instances of makeshift barricades and graffiti.

One officer was injured after being decked in the face by a skateboard during an attempted arrest, according to the press release.

Cops confirmed they used tear gas to try and disperse that crowd. Some protesters allegedly responding by "shooting paintballs at the officers' face shields, rendering them unable to see".

At that time, several other fires were lit in addition to the blaze which later erupted at the police precinct.

One image showed tires and a dumpster set alight, as several activists donned bike helmets as if ready for a confrontation with the cops.

Another image posted online showed a demonstrator left injured in the fracas, with a "chunk" of flesh allegedly cut out of her ankle.

Several businesses were also reported to have been looted. Graffiti was also scrawled across the North Precinct.

While demonstrations have largely been peacefully, there have also been previous instances of violence and destruction.

Last Thursday, a George Washington with a burning American flag draped across it was toppled by a group of activists.

The statue, which stood on the lawn of the German American Society in Northeast Portland, was pulled down by a group of about 30 to 40 protesters on Thursday night.

Footage of the incident, which took place on the eve of Juneteenth, showed the Washington statue draped in a US flag that had been set alight just moments before it was toppled.

The demonstrators placed a sticker on the head of the statue that read "You are on Native land" and also spray-painted the statue's pedestal with the phrase "Genocidal colonist".

It was also tagged with "1619" - a reference to the year when slaves were first brought to America.

Police said a smaller group had split from several hundred peaceful protesters and threw hot dogs at police and cut a fence surrounding the Justice Center, which has been a flashpoint for conflicts between demonstrators and police.

Another group set a fire around the Washington statue before tearing it down.

Those responsible draped the fallen statue in a second US flag and also set that alight.

The group who brought the statue down scattered before police arrived at the scene, according to local media reports.

It comes as a statue of Thomas Jefferson that was based outside Portland's Jefferson High School was also torn down last week.

The base of the statue had the words "slave owner" and George Floyd's name spray painted across it.