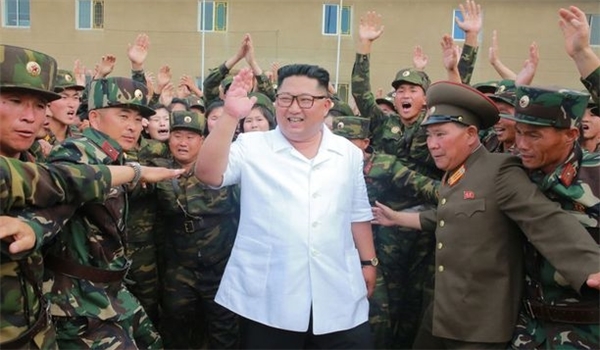 TEHRAN (FNA)- On June 25, 1950, the Democratic People’s Republic of Korea and the South launched an all-out war, drawing in both the US and China.

The conflict ended essentially where it started, with an armistice. American troops still remain on station against the now nuclear North.

Until recently, US involvement in a second Korean War would have meant horrendous conventional combat, but the damage would have been limited to forces on the Korean peninsula and nearby.

With the Republic of Korea capable of defending itself, Washington should formally end the conflict, drop its security guarantee, and bring home its troops.

Far from it, President Donald Trump continues to flirt with the default use of sanctions and aggressive ambitions to put pressure on the Democratic People's Republic of Korea to dismantle its nuclear weapons program.

Trump is still so amazed to wield the sanctions weapon despite the fact that Pyongyang suspended nuclear tests and missile launches after the countries’ two leaders met for the first time, and wanted sanctions relief. The two leaders managed to build goodwill for some time, but failed to agree on a deal to lift sanctions in exchange for Pyongyang abandoning its nuclear and missile programs.

To his credit, Trump says he is prepared to ease some sanctions, such as “certain humanitarian things” amid the coronavirus pandemic, but it’s not enough to convince Kim that after the collapse of the second summit in Hanoi there’s still some room for a longer “process,” and that the door should remain open to a third summit.

Here, Trump needs to appreciate that history is passing the sanctions regime by. If he continues this default policy, he will kill the prospects for a denuclearization deal. It is evident that those who have hardened their position against a phased approach sought by Pyongyang, in which gradual steps would be rewarded with relief from sanctions, are not in favor of diplomacy.

As with any application of force, sanctions against Pyongyang entail substantial risks and the geological facts speak otherwise. The escalation will not only drive up the risk of yet another collapse, but will make it harder for the two sides to focus on long-term “process” challenges.

The irony is that US wars and trade restrictions against other nations have backfired, dealing a major blow to the commercial interests of Western companies and investors. The economic sanctions, military pressure, and intemperate threats against Pyongyang will equally prove counterproductive.

North Korean media says Kim, for his part, plans to push forward with efforts to make the economy more self-sufficient “so as to deal a telling blow to the hostile forces who go with bloodshot eyes miscalculating that sanctions can bring (North Korea) to its knees.”

At a time when all American wars, trade conflicts and sanctions now seem to be permanent, why should Kim tolerate a peculiar and lopsided diplomatic arrangement in which he’d be so clearly the loser?

In a strange sense, there should be retaliatory plans in place in the event that Trump follows through on the default use of sanctions indefinitely. South Korean leaders also made a mistake to put their political reputation on the line in trusting Trump’s off-the-cuff belligerence and backhanded compliments at Kim. Even if Seoul hosts the third summit, Trump won’t offer Kim real concessions. His “various smaller deals” will also go nowhere – he wants capitulation.

We live in a very different world. Trump needs observation, insight, and audacity for a Pyongyang deal to win the next US presidential election. If he was to use foreign policy to enhance his political standing at home, the one place he could do it would be North Korea. It’s “the best investment” he’ll ever make.

In the international system of economic and geopolitical negotiations, the GOP also know that nothing could hurt Trump more than an aggressive stance against Pyongyang that failed to achieve its goals. It will be a failure to remember.

The conclusions seem self-evident: Except for showing more transparency in its nuclear and missile programs, Pyongyang has nothing else to offer but “strategic patience” and goodwill.

Whatever you might think of Kim, Trump needs to stop throwing a wrench into his diplomatic effort. It’s way past time for Trump to rid himself of the dystopian turn of mind and prove he’s ready for a peaceable and reasonable deal with Kim without precondition, beyond which there is no double-talking, no sabotage, and certainly no savage and deliberate “process. Sadly, this is yet to happen.

Washington should mark the anniversary of the Korean War by resuming discussions with the South over returning defense responsibility to South Korea. America’s defense commitment is an anachronism.

Equally important, the US should drop its sanctions against the North and as faces extraordinary challenges at home: it is time for Washington policymakers to focus attention and resources on meeting Americans’ needs.