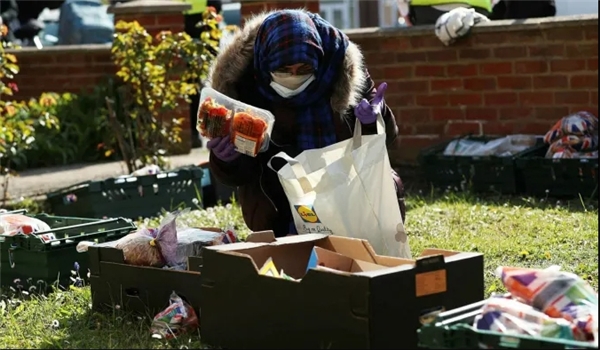 TEHRAN (FNA)- Government figures revealed that lack of money forced millions of people to go hungry or rely on food banks during the first few weeks of the coronavirus lockdown, with families and young adults worst affected.

Households with children, people with health issues and people aged 16-24 were most likely to either to skip meals or use food charities to feed themselves or their family in April and May, the Food Standards Agency (FSA) data showed, according to The Guardian.

Despite rising public concern in recent weeks over pandemic-related hunger and poverty issues – most notably in the government’s U-turn over holiday support for children on free school meals – these are the first official figures showing the scale of the problem.

Nearly a quarter of respondents to the FSA’s COVID-19 tracker survey in May reported they were concerned about whether they would be able to afford food. Of this group, 44% said they had skipped meals or bought less food.

“These data confirm findings from multiple other sources – food banks, other polling data, and many stories of people running out of food. The Covid-19 crisis has made it much harder to access food,” stated Dr. Rachel Loopstra, lecturer in nutrition at King’s College London.

The report was issued on the FSA’s website on Thursday with neither the agency’s social media nor press alert giving prominence to food banks or food insecurity.

The FSA’s survey of more than 2,000 adults’ food and eating habits under COVID-19 ran in April and May, with further waves planned for June and July. As well as food insecurity and food bank use, it looked at changes in individuals’ food consumption.

The first set of published results show nearly one in six people reported being food insecure in May – meaning they went without meals or cut down meal sizes, a proportion that rose to just under a quarter of families with children, and a third of 16-24 year olds.

Nearly one in five (19%) in five adults with a physical or mental health issue had been food insecure in May, the survey found. Older people aged 55-75 were least likely to struggle to put meals of the table – just 4% skipped meals in May.

The data suggests the pandemic has had a dramatic impact on food bank use. The Trussell trust’s State of Hunger report in November estimated 2% of the population had used food banks in the previous 12 months. While not directly comparable, this contrasts with the FSA’s figure of 7% in May.

Emma Revie, the chief executive of the Trussell Trust, which reported an 89% rise in food bank use in April, noted, “It is shocking that 7% of the population of Northern Ireland, Wales and England have been forced to use a food bank and charities during the pandemic.”

The survey showed lockdown restrictions led to an increase in people shopping locally, and fewer buying takeaways. Although people underlined they had eaten more healthy meals, wasted less food and ate together as a family more, nearly half underscored they had snacked more on cakes, biscuits and sweets.

A government spokesperson stated, “The extraordinary circumstances of this pandemic have meant real financial difficulty for many households. To help those who are struggling to afford food and other essentials, we are supporting frontline charities and community groups with a grant of up to £16mln, and we recently announced an extra £63mln which will be given to and distributed by local authorities to those in need.”

The survey covered England, Wales and Northern Ireland. A separate exercise is being carried out by the Scottish Food Standards Agency, which is expected to report at the end of the summer.

TEHRAN (FNA)- The Iranian foreign ministry on Thursday offered the country's proposal to the Azeri and Armenian officials to mediate between the two countries over the Nagorno-Karabakh dispute.

TEHRAN (FNA)- Russian Ambassador and Permanent Representative to the International Organizations in Vienna Mikhail Ulyanov called on parties to the Iran nuclear deal to make their utmost efforts to stand united in preserving the internationally-endorsed agreement.

TEHRAN (FNA)- Iranian Ambassador to Tbilisi Seyed Javad Qavam Shahidi said that his country supports Georgia’s independence and territorial integrity, warning of the US attempts to interfere in the two countries’ ties.

TEHRAN (FNA)- Senior Iranian and Afghan officials in a meeting in Kabul on Thursday underlined the necessity for the rapid implementation of economic agreements between the two countries.

TEHRAN (FNA)- The Iranian health ministry announced on Thursday that 267,061 coronavirus cases have been identified in the country so far, adding that 198 patients have passed away since yesterday.

TEHRAN (FNA)- People are more likely to say that racism has got worse or stayed the same during their lifetimes than it has become less common, according to a poll that paints a bleak picture of discrimination in the UK.

TEHRAN (FNA)- The administration of President Donald Trump took control of COVID-19 data in the United States, leaving public health experts gravely concerned about whether anyone outside the administration will be able to access the vital information moving forward.

TEHRAN (FNA)- The latest modeling projects the number of coronavirus deaths in the US to increase further, even as one research team suggests the near-universal use of masks could save 40,000 lives between now and November.

Iranian Deputy FM in Kabul on Expansion of Ties