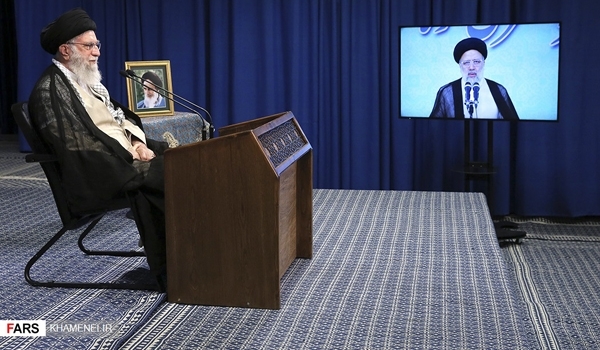 TEHRAN (FNA)- Supreme Leader of the Islamic Revolution Ayatollah Seyed Ali Khamenei asked the Judiciary to make utmost efforts to seriously continue fight against corruption based on the country's laws.

"Fighting against corruption is at its peak in this era and it should continue without tolerance and based on righteousness, justice, law and without violence and oppression against the innocent," Ayatollah Khamenei said, addressing the National Conference of the Judiciary via a video conference on Saturday.

"The recent actions of the Judiciary in reviving public rights are truly pleasing. Prosecutors must try their best to defend the rights of people. These rights include prosecuting those who harm the environment and confronting the unnecessary shutdown of manufacturing firms," he added.

"People’s easy access to the Judiciary, efforts to improve people's judicial awareness, constant and direct contact with the people and benefiting from assistance and information from the public in issues such as fighting corruption are instances of a people-oriented Judiciary," Ayatollah Khamenei said.

Elsewhere, the Leader referred to the West's attempts to hide the realities and injustice in their movies by displaying justice in their courts, and said they do not speak about the US president's remarks about the 10-year-long prison term for those who damage the symbols of slavery.

"The US president talks about 10 years of imprisonment for those who bring down symbols of slavery and racism, and the US government separates the children of immigrants from their parents. But most US mainstream media and movies depict US courts as being centers of absolute justice," Ayatollah Khamenei said.

He underscored the need for taking care of the country in all fields, including against the enmities of the evil US and evil Britain and the measures adopted by the European governments, and said if the officials act well upon their responsibilities, the enemies will fail and their attempts to bring the Iranian nation to its knee will backfire and they will be pushed back.

In March 2019, Iran's Judiciary Chief Seyed Ebrahim Rayeesi underlined his serious fight against the elements threatening security in the country and those who violate the law.

"No one under any condition and in any position is entitled to bypass and violate the law," Rayeesi said, addressing an inauguration ceremony to introduce him as the new judiciary chief in Tehran at the time.

He also underscored the importance of security, saying that Iran is one of the most secure countries in the world but different threats yet exist.

"We will not at all compromise or ignore violations and organized crimes and any distortion of the country's security," he said.

Elsewhere, Rayeesi described the Islamic laws as a source of happiness for human beings, and said the countries and organizations which only claim to be advocates of human rights are actually suspects with "a long list of violations of human rights is in their records".