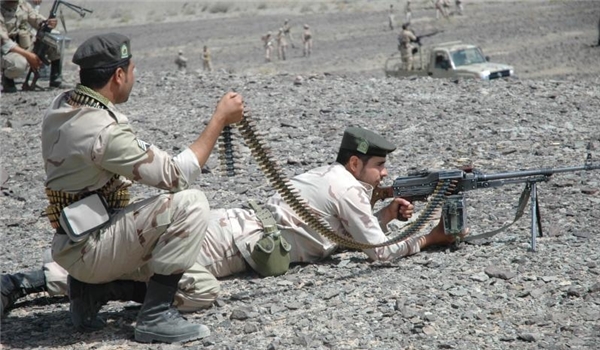 "My comrades in the Western and Northwestern borders of the country are bravely standing against the anti-revolutionary groups and enemies, and we are running serious confrontation against terrorists and those who are after sowing discord between us and the neighboring states, specially the friendly and brotherly country of Turkey," General Goudarzi said on Saturday.

He also described prevention of drug trafficking as one of the important priorities of the Iranian border guards, and said Iran discovers and seizes 90% of the trafficked opium, 46% of morphine and 23% of heroine in the world.

General Goudarzi said that 3,800 Iranian forces have been martyred and 12,000 others have been wounded in fight against drug traffickers.

In relevant remarks earlier this month, Iran's Border Guard Commander and Head of Anti-Narcotics Committee, Brigadier General Qassem Rezayee said that the anti-narcotics battle of Iran’s police is unrivaled in the world, adding that the Western governments have had the least cooperation with Iran in this field.

Rezayee made the remarks, addressing a meeting held via video conference marking the International Day against Drug Abuse and Illicit Trafficking.

Representative of the United Nations Office on Drugs and Crime (UNODC) Alexander Fedulov was also present in the virtual meeting.

He said that during operations against drug smugglers, over 3,800 of Iranian security and army officers have lost their lives.

Presently, everybody knows that Iran is pioneer in combat against drug trafficking, the official noted.

However, we expect Western governments to support their people because illicit drugs are used by arrogant powers as a terrorist instrument to impose (their policies) on world, Rezayee said.

“Although Iran has spent several hundred thousand dollars for closure of its eastern borders and is one of the main partners for UNODC, the Western states have made the least cooperation on securing fund for fighting drug traffickers,” he said.

About Iran's Police anti-drug activities on border areas especially on joint border post with Afghanistan, the official said that seizure of narcotics has had 66 percent increase compared with last year.

During the first three months of the Iranian year started on March 20, Iran's police have disbanded 260 drug trafficking networks, the general stressed.