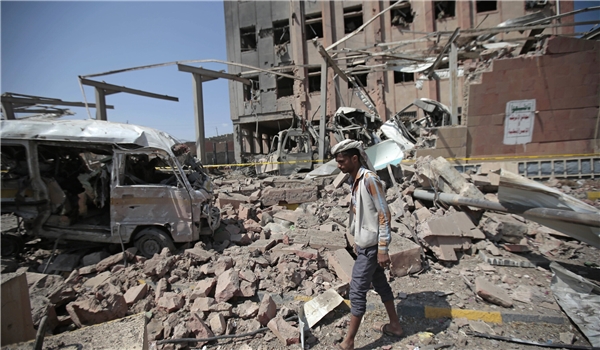 TEHRAN (FNA)- International aid agencies and human rights groups, as well as governments have woken up to the horrors of coronavirus outbreak in Yemen.

They say the Trump administration has a duty to stop supporting the unconscionable support and weapon sales to the Saudis, as called for by the European Parliament and implemented by several EU countries. They even came up with a new bipartisan bill in the US Senate attempting to force an end to US involvement in the Saudi war, because they say the war was never authorized by Congress.

Despite international outrage over the illegality of the unnecessary conflict and the unsubstantiated claims of Iranian involvement, some US officials claim the legal pretext for the war is that the US has sold Saudi Arabia all the warplanes and promised to “service” those planes, which in and of itself means refueling the planes during combat operations and airstrikes against civilian objects, including residential areas, hospitals and schools, factories, UNESCO World heritage sights, orphanages and wedding parties.

At bottom, there is no authorization for the war, not even a United Nations mandate, which clearly makes the US government, due to a host of reliable data and official statements, complicit in Saudi war crimes and crimes committed against humanity in the poorest country in the Arab world.

Western governments approving the export of arms to Saudi Arabia have received many detailed and credible reports from the UN and other reputable bodies over the past years pointing to a pattern of horrific human rights abuses and war crimes committed throughout Yemen by the Saudi forces and allies.

According to Amnesty International, “In the face of unbearable suffering of civilians and mounting casualties those governments are still carrying on business as usual, even escalating arms transfers. This is a clear breach of the golden rules in the Arms Trade Treaty.”

In the face of unbearable suffering of civilians amid the coronavirus pandemic and mounting illnesses, Western governments have failed to enact convincing measures to prevent further violations, conduct independent and impartial investigations, or bring the perpetrators to justice.

According to many human rights groups and international aid organizations, including the UN Human Rights Watch and OXFAM, Western governments, instead, are carrying on business as usual, and in some cases even escalating arms transfers - instead of sending medicines like test kits and protective gear.

This is a clear breach of the golden rules in the Arms Trade Treaty, International Law, International Humanitarian law, and the UN Charter. Under the same laws and treaties, all Western governments must immediately halt their deadly arms transfers and military support to Saudi Arabia and its coalition partners that are being used to commit and facilitate serious violations of International Human Rights and Humanitarian Law in Yemen.

Washington and its NATO allies know that it’s because they have turned a blind eye that Saudi Arabia continues to bomb Yemen. They also know that no proxy warfare is being played out for influence there.

Quite the opposite, there is an American-Saudi imprint on every civilian life lost in Yemen. They are deliberately using disease and starvation and the withdrawal of humanitarian and medical support as a tactic. While Saudi Arabia is dropping the bombs on the impoverished country and its people, the US is banning food and medicine, and supplying the weaponry, refueling their bombers in the air, and providing diplomatic support for the war at the UN.

Under the UN Charter, the world body has a duty to exert pressure on Riyadh and Washington to end the war and the illegal blockade of Yemen, which continues to exacerbate the public health crisis, the most severe in years.