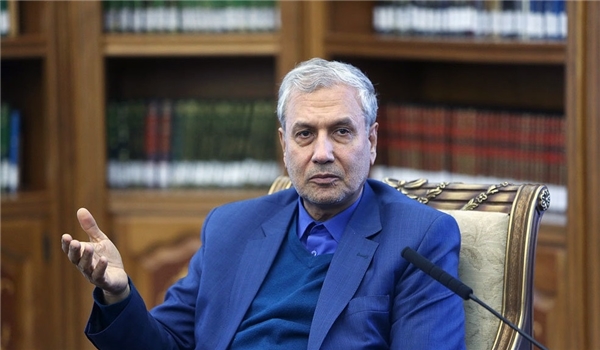 TEHRAN (FNA)- Iranian Government Spokesman Ali Rabiyee voiced deep regret over Europe's weakness towards the US, stressing that the anti-Iran resolution approved at the International Atomic Energy Agency (IAEA) which was sponsored by the EU3 will receive a tough response from Tehran.

"The resolution is an evidence to show Europe's non-compliance with its nuclear deal undertakings and the surprising weakness of Europe vis a vis the US will, and it is dangerous for Europe," Rabiyee told reporters in Tehran on Tuesday.

He blasted certain IAEA members for using intel collected through spying to raise allegations and start a political issue against Iran, and said, "This resolution will not remain without a response", implying that the IAEA move has left a great negative impact on his nation.

On Friday, the IAEA's Board of Governors passed a resolution, put forward by Britain, France and Germany, to push for intrusive inspections of two Iranian nuclear sites that the trio claims may have been used for undeclared nuclear activities in the early 2000s.

In relevant remarks on Friday, Iranian Foreign Minister Mohammad Javad Zarif said the EU Troika (Britain, France and Germany) are accomplices of the US and Israel, adding that they are not entitled to advise Iran.

"E3 must stop public face-saving and muster the courage to state publicly what they admit privately: their failure to fulfill even own JCPOA duties due to total impotence in resisting US bullying," Zarif tweeted.

"Behind facade, E3 are accessories to Trump and Netanyahu—and in no position to counsel Iran," he added.

The Iranian foreign minister said that "E3 should not be an accessory, after failing own JCPOA duties."

"We've nothing to hide. More inspections in Iran over last 5 yearrs than in IAEA history," he noted.

"An agreeable solution is possible, but Res will ruin it," Zarif reiterated.