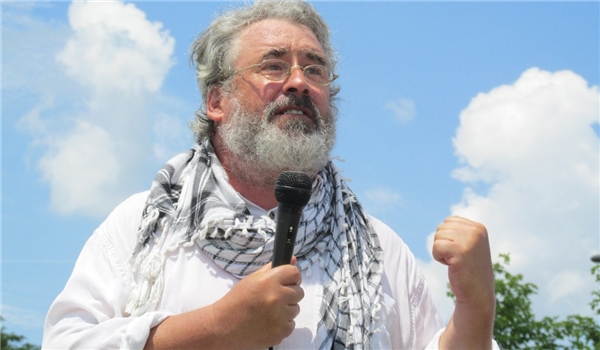 Speaking to FNA, Terrell said the US military presence in the Asian country “[has] never been about democracy… [it] is the main provocation of that violence and so the war, inevitably, will be continued and the troops will stay”.

Brian Terrell is a US-based peace activist. he has travelled to Afghanistan seven times since 2010, and participated in public speaking events in Central America, Mexico, Palestine, Iraq, Bahrain, Korea and Russia. He is a co-coordinator for Voices for Creative Non-Violence and event coordinator for the Nevada Desert Experience.

Q: The US says it will withdraw its forces from Afghanistan. What do you think the US legacy has been after 19 years of invasion and occupation?

A: It is unlikely that the US troops will leave Afghanistan soon. The Afghan government, not included in the talks at Doha, immediately refused to comply with the unconditional release of Taliban prisoners that was intended to be a major first step. The Afghan government, now split with both Ashraf Ghani and Abdullah Abdullah claiming to be president, is not the only party shut out of the negotiations - only the US government and the Taliban, the two main provocateurs of the violence there, took part. The Afghan Women’s Network made a statement saying that “this is little more than division of power and resources among the Taliban, warlords and political strongmen.” The US presence has never been about women’s rights, never been about democracy and one of the things most feared by the US, I fear, is an Afghanistan at peace. 18 years of war have been immensely profitable to some US corporations and a country with economic and political autonomy, with human rights and with peaceful relations with its neighbors, which include China, Iran and former Soviet republics, is not the interest of the US at this time.

Q: How do you view the withdrawal of US troops from Afghanistan following the US-Taliban peace deal?

A: Of course, Trump will have to make a show of it, but the proposed withdrawal of US troops from Afghanistan is only called an “aspirational benchmark” conditional on the cessation of violence and the acceptance by all parties of a “peace deal” that suits no one. The presence of US troops is the main provocation of that violence and so the war, inevitably, will be continued and the troops will stay. Again the blame will be on the Afghan government, the Taliban, maybe even Daesh. None of these are innocent, but the main responsibility for the unending war is the unending foreign military occupation by the US. There is no easy solution or quick fix for Afghanistan, but for 18 years, the US has been the problem there and cannot be the solution. The Afghan people will need to build the peace there, and that process requires the US military to leave unconditionally.

Q: Inheriting no infrastructure or economy left after nearly two decades of occupation, how would the new Afghan generation do after the US invasion?

A: The median age in Afghanistan is just over 18 years and so most Afghans have no memories of before the US invasion. There should be no question of Afghanistan having to “pay back” for what was done to them. While the war has been justified to the American people as humanitarian, the damage done to Afghanistan is immeasurable and the US owes a great debt to repair the country. We need to send reparations - the “foreign aid” so far, many billions of dollars for the “reconstruction” of the country has been wasted. In the words of the US Special Inspector General for Afghanistan Reconstruction, much of the spending has been “woefully out of touch at best, and delusional at worst” and much of it has gone to simple graft and corruption by US and Afghan profiteers. If there is no civil society there to administer reparation funds from the US, the UN or another international entity would be needed to help, but US government and corporations should not direct or profit from the reconstruction of Afghanistan.