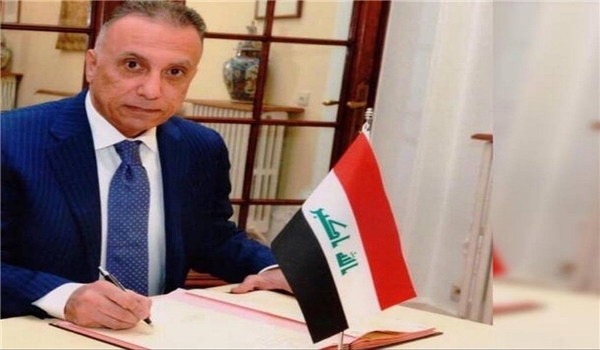 Baghdad will stand by Tehran during the hard times as Tehran did the same, al-Kadhimi said in a meeting with Governor of Central Bank of Iran (CBI) Abdonnaser Hemmati on Wednesday who was in Iraq for talks on financial and banking issues between the two countries.

Iraq will cooperate with Iran to solve the problems for payments of oil and natural gas, he said, adding that he has given the necessary orders to the relevant officials.

Al-Kadhimi said that with solving the money transfer problem by providing food and basic goods, and said Iraqi merchants are interested in cooperation.

He hoped that the oppressive sanctions against Iran will be removed soon, and said that Iraqi officials will use Iran’s experience in the fight against challenges.

Trade is a goal of the Iraqi government although the coronavirus outbreak reduced trade, it will increase in the near future, said al-Kadhimi, stressing that all the debts should be paid in full.

Hemmati, for his part, delivered Iranian President Hassan Rouhani’s greeting to the Iraqi PM and thanked Iraq for all-out support for Iran.

He said that he had had constructive meetings with the Iraqi minister of finance and the country’s Central Bank and had reached good agreements.

Hemmati said that in the past few months, there were some problems, but today it was decided to use Iran’s sources in Iraq for providing basic goods.

Hemmati in a meeting with his Iraqi counterpart Ali Mohsen al-Alaq on Wednesday called for the expansion of banking cooperation, saying that Tehran will use its assets in Iraq to purchase basic commodities not banned by sanctions.

During the meeting in Baghdad, Hemmati urged a joint mechanism to be used by both countries to provide Iran with access to basic commodities.

Referring to the already signed agreements between the two countries, he said that Iran aims to make use of its resources and assets in Iraq for purchasing basic commodities which are not banned under the sanctions imposed on Tehran.

Hemmati noted that the two sides also reached good agreements during this visit, and said that the timetable for implementing the agreements is of special importance.

Al-Alaq, for his part, said that a document signed a year ago between the central banks of Iran and Iraq clearly defines the banking and financial relations between the two countries and the way to use the resources of the Central Bank of Iran.

Today the two sides agreed to act based on the same agreement, he said.