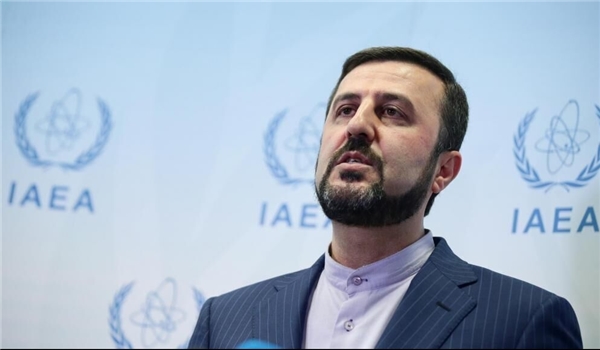 Qaribabadi made the remarks on Tuesday while explaining about the positions of the Islamic Republic of Iran in a video conference held on the subject of reviewing the IAEA Director General's report on the verification of JCPOA's implementation in Iran.

He first expressed the Islamic Republic of Iran's serious concern about the possibility of the secrecy of the IAEA Board of Governors' meeting being compromised, noting that technical experts have warned that holding a meeting in this format will no doubt have any control over who is currently listening, recording, and disclosing confidential information.

The Iranian ambassador added that if such a thing happens, the secretariat will be held accountable for the consequences of non-compliance with the principles of confidentiality. At the same time, the responsibility of member states, especially given that such confidential information has been leaked to the media and even published by some institutions, should not be ignored.

The envoy went on to say that it is essential that the IAEA take appropriate measures to ensure the protection of the confidentiality of information, including when such information is made available to the Member States.

Qaribabadi also stated that despite the fact that JCPOA faces serious challenges to survive, the Director General's report is a good testament to the level of cooperation between Iran and the IAEA.

"As of January 16, 2016, the IAEA is reviewing and verifying Iran's compliance with its nuclear obligations," the report said.

He noted this report also shows that the IAEA is even able to really verify and monitor the actions that Iran has halted in fulfilling some of its obligations under the JCPOA. The report also described Iran's level of cooperation with the IAEA at the time of the Corona outbreak as "exceptional".

The ambassador of highlighted that with regard to the implementation of JCPOA, it must be acknowledged that not only has there been no significant positive progress, but the situation has worsened. On May 27, 2020, the United States announced that it would unilaterally sanction all nuclear projects left over from the JCPOA - the Arak Reactor, the supply of enriched uranium for Tehran's research reactor, and the export of Iran's research reactor's fuel. These US sanctions and malicious policies have prevented the implementation of the relevant nuclear provisions of Security Council Resolution 2231 (2015) by member states, including the Islamic Republic of Iran.

He added that in fact, with the continuation of the irresponsible behavior of the United States, the situation around this agreement is darker than before.

"In a letter to the Director General of the Agency on June 9, 2020, I have reflected the position of the Islamic Republic of Iran in this regard, which has also been published as an agency document," the envoy added.

In relevant remarks on Tuesday, Iranian Foreign Minister Mohammad Javad Zarif blasted the US and its allies' attempts against Iran at the International Atomic Energy Agency, saying that Tehran will not allow them to make an instrumental use of the IAEA.

"We will not allow an Iran investigations based on documents that rise from espionage claims. We thought that the Agency values its credibility. We still believe in transparency. We welcome the Russian government's initiatives to strengthen Iran-IAEA relations and we will not allow the Agency to turn into an instrument for those who want to annihilate the nuclear deal and all international undertakings," Zarif told reporters in a joint press conference with his Russian counterpart Sergey Lavrov in Moscow.

"We do not allow a country whose policy is withdrawal from international agreements to use international organizations to pressure Iran," he added.

Zarif said that the US is directly annihilating international laws by pressuring the secretariats of international organizations, adding that 15 reports by the IAEA have shown that Iran has fully cooperated with the UN nuclear watchdog.