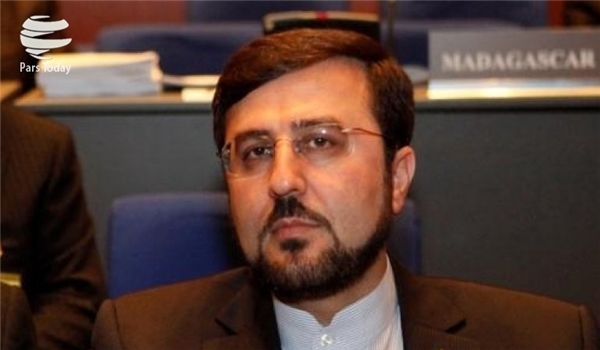 "It is true that we have extensive and transparent cooperation with the Agency but this does not mean that we accept any demand by the Agency which is based on the baseless claims of our enemies. No other country will do so either," Qaribabadi told reporters on Tuesday.

His comments came after the western media claimed that the three European members of 2015 nuclear deal have prepared a resolution which calls on Iran to increase cooperation with the IAEA.

"As Iran continues constructive and extensive cooperation with the Agency, introduction of a resolution to demand Iran to show cooperation and accept these two Agency demands is a regretful and fully unconstructive measure," he added.

Qaribabadi blasted the three European states for their inaction in implementation of the nuclear deal, advising them not to make the conditions more complicated and difficult.

"Naturally, in case this resolution with such a fully clear American agenda is approved, the Islamic Republic of Iran will also be forced to adopt the necessary appropriate measures, and those who have led the act should account for such political and destructive approaches," he added.

In relevant remarks on Monday, Iranian Government Spokesman Ali Rabiyee deplored the US and Israel for meddling in the International Atomic Energy Agency's affairs, saying that the IAEA should keep its independence.