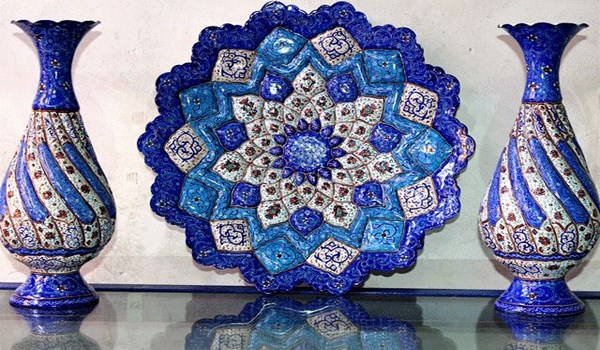 He noted that some $273 million of the above was exported officially through customs, and about $250 million was earned via suitcase trade (allowed for customs-free and tax-free transfer) through various provinces.

Iran’s handicrafts exports reached $289 million in the year 1397, showing three percent growth year on year, based on data released by the Ministry of Cultural Heritage, Tourism, and Handicrafts. Traditional ceramics, pottery vessels, handwoven cloths as well as personal ornamentations with precious and semi-precious gemstones were exported to Iraq, Afghanistan, Germany, the U.S., the UK, and other countries.

In relevant remarks last week, Iranian President Hassan Rouhani ordered the country's Minister of Cultural Heritage and Tourism to prepare the necessary health instructions for reopening tourism and handicrafts centers with the cooperation of the Health Committee of the National Task Force for Fighting Coronavirus.

President Hassan Rouhani underlined the importance of the tourism industry in the country's economy and its significant contribution to the life cycle of ethnic groups, including rural areas, and told Iranian Minister of Cultural Heritage, Handicrafts and Tourism Ali Asghar Mounesan to prepare the necessary health instructions for reopening tourism and handicrafts centers.

The Iranian president referred to the importance of handicrafts as an important area of ​​economic activity in the lives of people, specially villagers, as well as one of the most important elements of cultural identity, which has a significant impact on the economic cycle of people's lives, and said, "With regard to the domestic market and the export share of handicrafts, we must provide the grounds for effective role of businesses in this field with careful planning along with other industries in achieving surge in production with the participation of the people."