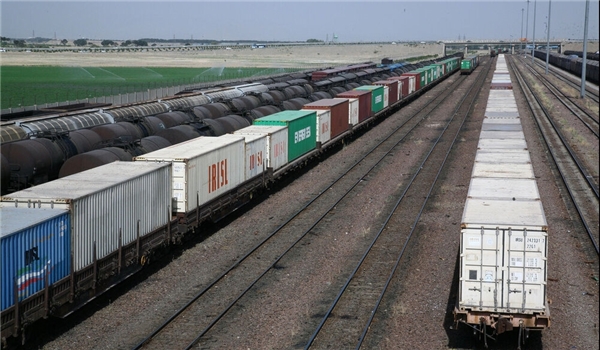 TEHRAN (FNA)- Iran considerably increased its non-oil export to its Northern neighbor Azerbaijan from Astara railway terminal during the first two months of the current Iranian calendar year (March 20, 2020-May 20, 2020).

The managing director of Iran's North Railway Company Gholam-Hossein Valadi said that Iran exported 41,535 tons of commodities to Azerbaijan from its Northern city of Astara, showing a 178 percent increase compared with the figure of the corresponding period of the previous year.

He pointed out that cement, clinker, chemical products, tiles, steel, and home appliances were among the goods exported to Azerbaijan.

In early March 2017, Azerbaijan officially launched a rail link with Iran by sending a train across the border to Iran’s Astara port city thus taking an ambitious multimodal transport project that connects Northern Europe to India closer to reality.

The train arrived in Iran simultaneously with a visit to the Islamic Republic by Azerbaijan’s President Ilham Aliyev where he discussed the implementation of the North-South Transport Corridor (NSTC) with Iran’s President Hassan Rouhani.

In addition to Iran, India and Russia, countries that are on board to integrate into the transit network include Armenia, Azerbaijan, Belarus, Kyrgyzstan, Kazakhstan, Ukraine, Turkey, Tajikistan, Oman, Syria and Bulgaria.