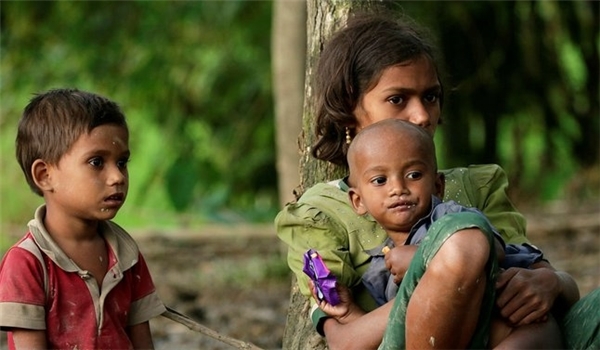 Health experts have long warned that the deadly virus could race through the vast network of settlements housing almost a million refugees in the country's Southeast, Daily Sabah reported.

"He died on May 31. But last night we got the confirmation that he died of COVID-19," Toha Bhuiyan, a senior health official in the Cox's Bazar district, stated.

The fatality was in Kutupalong, the largest of the camps, which is home to roughly 600,000 people. The man was among at least 29 Rohingya to have tested positive for the virus in the camps.

Bhuiyan said the victim died in an isolation center run by the medical charity Doctors Without Borders and was buried in the camp the same day.

"We are going to speak to administrators in the camp and alert people about the death," Bhuiyan noted, adding they were trying to find people the deceased had been in contact with.

Most of the refugees have been there since around 750,000 of the Muslim minority fled a 2017 military offensive in neighboring Myanmar for which its government faces genocide charges for at the United Nation's top court.

The persecution of Rohingya Muslims in Myanmar is one of the worst humanitarian tragedies of our time, but it is also the most overlooked.

Rohingya, described by the UN as one of the most persecuted communities in the world, has been facing systematic state persecution in the Northern Rakhine state of Myanmar since the early 1970s.

In early April, authorities had locked down Cox's Bazar, home to 3.4 million people including the refugees after several COVID-19 cases reached the country. Bangladesh restricted traffic in and out of the camps and forced aid organizations to slash manpower by 80%.

Aid agencies and rights groups have been demanding Bangladesh's government withdraw restrictions on using mobile phones and the internet in the camps. Authorities had suspended internet use for security reasons, and recent reports said armed groups among the refugees were allegedly involved in kidnappings and smuggling of drugs.

TEHRAN (FNA)- Iran's President Hassan Rouhani said smart restrictions should be reinstated in proportion to the causes of the coronavirus outbreak in each region.

TEHRAN (FNA)- America’s top general said military intelligence agencies are working to corroborate reports of Russia paying Taliban fighters bounties for killing US soldiers and vowed a response if they were confirmed.

TEHRAN (FNA)- A cultural official said that the archeological research center in Zanjan, Northwest of Iran, will cooperate with German Research Foundation DFG affiliated to German Ruhr University Bochum on research studies based on bilateral agreement.

TEHRAN (FNA)- The US Centers for Disease Control and Prevention will not revise its guidelines for reopening schools despite calls from President Donald Trump and the White House to do so, agency Director Dr. Robert Redfield said Thursday.

TEHRAN (FNA)- Germany has confirmed 395 new COVID-19 cases over the past 24 hours, with the total count reaching 198,178, the Robert Koch Institute said on Friday.

TEHRAN (FNA)- Coronavirus outbreaks are not under control in most countries and the pandemic is still accelerating globally, with infections doubling in the past six weeks, the head of the World Health Organization warned.

TEHRAN (FNA)- An employee of Germany's Federal Press Office was found to have worked for an Egyptian secret service for years, according to a report presented on Thursday by Interior Minister Horst Seehofer.

TEHRAN (FNA)- A United Nations special rapporteur called on the member states of the UN Human Rights Council to pressure Saudi Arabia to free women activists, four months before the Arab kingdom is to hold the 2020 G20 Riyadh summit.

TEHRAN (FNA)-Some states have reopened too quickly, allowing the coronavirus pandemic to come roaring back, Dr. Anthony Fauci, director of the National Institute of Allergy and Infectious Diseases said Thursday.

Syria's Envoy: UNSC Failure Behind Use of Drones by Some States for Terrorist Acts

TEHRAN (FNA)- Syria said the UN Security Council's silence has emboldened some hostile states and foreign-sponsored militants to make vast use of unmanned aerial vehicles to launch acts of terrorism and aggression across the Arab country.

TEHRAN (FNA)- The United States imposed Global Magnitsky sanctions on the Xinjiang Public Security Bureau (XPSB) and four current or former Chinese officials, the US Department of the Treasury said in a press release on Thursday.

TEHRAN (FNA)- A summit between US President Donald Trump and the North Korean leader might not take place this year, but "we never know", Kim Jong- un's sister, Kim Yo Jong, said on Thursday, according to Korean Central News Agency (KCNA).
﻿
﻿
Sections